I am totally panicking!  Winterfest starts next week!  Okay, granted, today is Tuesday of this week and Wiinterfest officially starts on Saturday of next week so there's really almost two weeks but...   Aack!  I'm so not ready!

I really am freaking out a little bit.  It will be okay though.  An hour or two into the first night of Winterfest and I'll calm down and chill out.  Hopefully not literally - it is an outdoor, night time festival in December!  Another Aack!  But mainly, I just don't like not knowing what to expect.  I've never done anything close to something this size, I'm shy and introverted (I know - based on my ramblings here, who'd have guessed that right? But I am,) the festival runs 26 nights and did I mention it's outdoors, at night, in November and December?  What have I gotten myself into??  Aack!

But as one of the Hallmark Christmas movies said, fear is just another form of excitement.  I'm not afraid, I'm excited. 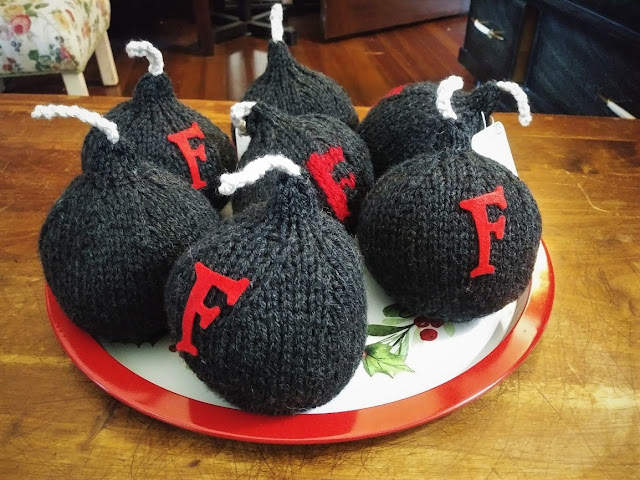 And I will be very, very excited when I finish knitting four more f-bombs and reach my inventory goal.

I've been having trouble meeting my inventory goal with these f-bombs because every time someone sees me knitting them, they want one.  No, that's not correct.  They want five!  They seem to be selling faster than I can knit them.

I sure am glad I discovered Brava from Knit Picks.  The first few bombs I knit, I was using some horrible, by-the-pound acrylic from the big box craft store.  It was horrible to knit with.  It was stiff, made my hands ache, and it clung to my fingers weirdly so that my gauge was, well, let's just say, not consistent.  But thankfully I gave Brava a try.  It is also worsted acrylic but knits up more like a nice wool.  It looks like wool too.  It doesn't have that flat, solid black tone that many acrylics, specially the cheap ones, have.  And Brava is inexpensive.  Actually, yardage wise, it's within pennies of that horrible by-the-pound skein I bought.

Ooh!  AND, I just noticed - it's on sale!  I think I'll be stocking up.  Hayden probably needs a few more hats and sweaters.