The needles have been busy but that doesn't mean I have anything interesting to show you.  So... 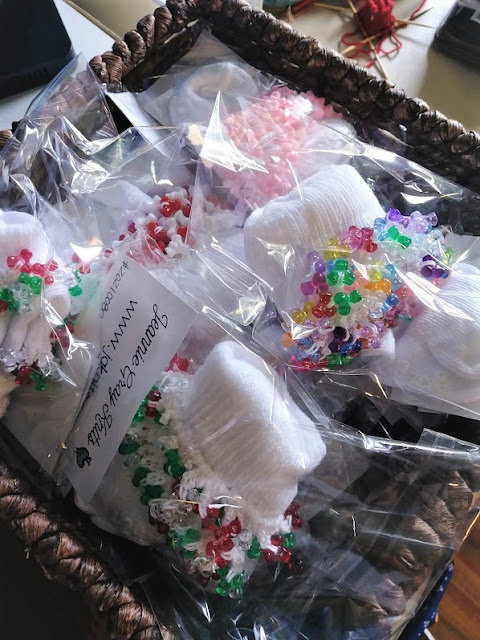 A basket of socks.  Beaded socks for the Winterfest booth.

Winterfest is quickly approaching.  Just about 30 days to go.  And I'm starting to freak just a little bit.  I've never participated in anything so big before and the nerves are building.  It also means I'm knitting/crafting the same things over and over and over again... So you get a basket of beaded socks.

But hey - those socks are packaged and tagged and ready to be placed lovingly in the booth.  One less thing on the to-do list.  Only 40,000 more things to go. 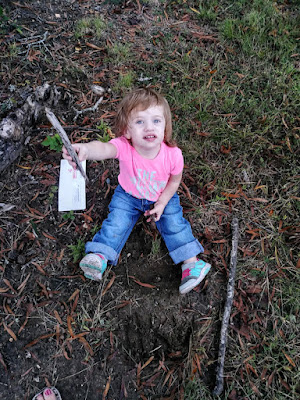 It's not all knit, knit, stitch, stitch though. I take occasional moments to hang with Hayden.  She's turning out to be a bit of a tomboy despite her love of pink and unicorns.  She loves collecting sticks and rocks and playing in the mud.  She also likes to walk out to the road (Don't worry - we carry her when we get close) to wave at the cars and trucks going by.  I've been trying to teach her the "Hey truck, please honk your horn" arm movement but she just waves, usually with a stick in her hand.  Many of the trucks honk and wave to her anyway.  I was afraid the honking would scare her, but she just giggles and grins and waves back.  And every time a car passes she says, "Bye."  It's so sweet and so adorable.

And now I have to go knit and stitch some more.

What have you been up to lately?