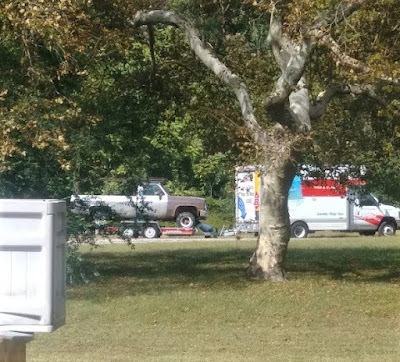 We said goodbye to The Gray Ghost.  Some twenty plus years ago, my husband traded a a broken down boat with a cracked engine for a broken down jeep.   He had great plans for turning that jeep into a beach buggy but.... A year or two later he traded the jeep for an unused whirlpool tub.  That damn tub sat in our drive way for a few years until he finally traded it for The Gray Ghost.  I don't know the details as far as year and model, but it was an older Chevy pickup truck that barely ran and had more rust than metal.  And, you could see where at one time, "The Gray Ghost" had been painted on the tailgate.

My husband yanked the engine out, put in a racing engine and proceeded to race it at the dirt track every weekend.  The Gray Ghost actually won the championship one year!  Life got busy and Mike stopped racing.  And then my dad's car died and rather than having a 78 or 79 year old man buy a new car, Mike offered him The Gray Ghost.  My dad LOVED that truck!  Well, he HATED putting fuel in it, but he sure did love driving it.  At some point, Dad put a bumper sticker on it that said "If it wasn't for flashbacks, I'd have no memory at all."  We all thought it was pretty funny. Specially if you knew my dad...  When Dad died, the truck came back home to us where it has sat for 15+ years except for the occasional run to the dump or the occasional deep snow rednecking adventure.  That truck was made for rednecking in the snow, I tell ya!

Anyway, Mike finally came to the conclusion that the truck would be better off in the hands of someone who'd drive it occassionally so he listed it for sale.  And someone who plans to fix it up and restore it bought it this past week.  It was a very sad moment in our lives as the new owner towed The Gray Ghost away.  We all have fond memories of that truck and I sure hope the new owner takes care of him.  I know cars are normally girls but The Gray Ghost was way too rusty and tough to be a girl. 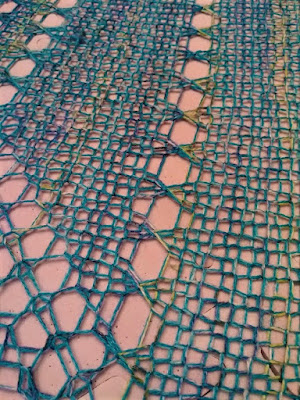 I finished a shawl that I don't think I ever showed you the beginnings of.  I didn't follow a pattern but it's somewhat similar to a Reyna, which is my go-to shawl pattern.  I've never noticed it before but I love the way the *yo, k2tog*'s look like crossed stitches.  I've knit, maybe not 100's of these, but more than 20 and I've never noticed that before. 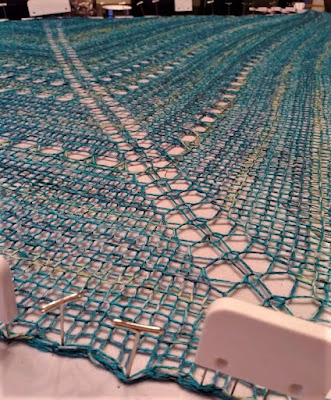 I knit this one with two strands of Whisper Lace held together.  The shawl is a gift and I was under a deadline so I needed it to be a quick knit.  The colors I used are Ocean Torrent and Harbor.  One was a solid and one was a self-striping yarn.  I love the way the stripes ended up being so muted.  And, as ususal for my photos, the color is off and the photo doesn't do the shawl justice.  I swear, one of these days, we will move into a house with good lighting. 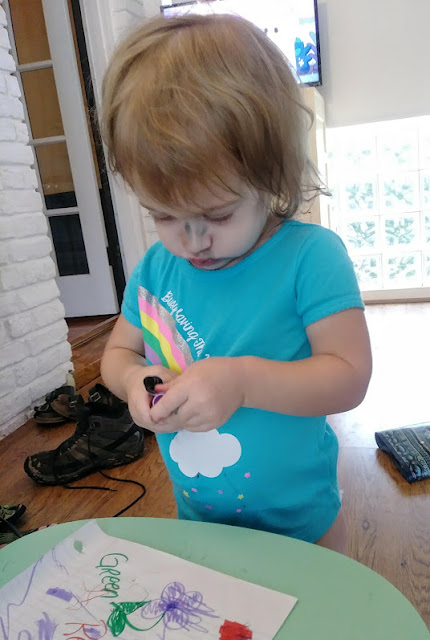 And last of all, Hayden got markers.  Thankfully, washable markers.  She likes to color her hands almost as much as she likes to color on the paper.  And we learned that the ink really does wash off.  It also smears.  The dog came up and licked Hayden on the face and she wiped the dog slobber off with her colored hand and ended up looking like she'd gone three rounds with Rocky Balboa.

Now we just sit back and wait to see how long before the walls are covered in marker.