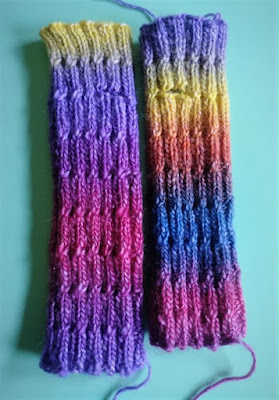 Now, how on earth did I do that?  I used a row counter.  I used the same needles.  I knit them on consecutive days.

You know what I did?  I started off several repeats using the "0" on the row counter as a counted row.  Instead of telling the marker I was on row 1, I told it I was knitting row 0.  Doh!

Good thing I used a large skein.  I can simply recreate my error and knit a second pair of mismatched gloves that hopefully will match these.  Although it might be easier, simpliler and quicker to forget these and just start over.

If you are interested, the yarn is left over Colorburst I still had in the stash pile.