Welcome to today's brilliant Three on Thursday post about three random things going on in my life.

1.  I've been reading a lot of murder mystery/detective novels lately.  And oddly, more than one had bodies hidden and/or moved in oil drums.

2.  As I've mentioned before, we are the only house on our road.  We don't own all the property on the road, but we are the only people here.  We are also right on the edge of the swamp and with all the rain we've had this past year, the swamp has been more river than swamp.  The other day, I took a walk down our road for the first time in a long time and discovered someone had left six oil drums (actually five gallon buckets) on the side of the road.

In an effort to be environmentally conscious, (because what would happen if the water rose just a little more and those oil buckets turned over and dumped into the swamp??) I called the non-emergency number for the sheriff's office to report it.  And the deputy had the nerve to think I was insane for not opening the buckets to confirm it was oil because I was afraid they might contain body parts.

Okay, actually, I just didn't want to get oil all over myself but I thought fear made a better story than vanity.  Apparently, I should have gone with vanity when talking to the sheriff's department.  I'm probably on some kind of watch list now. 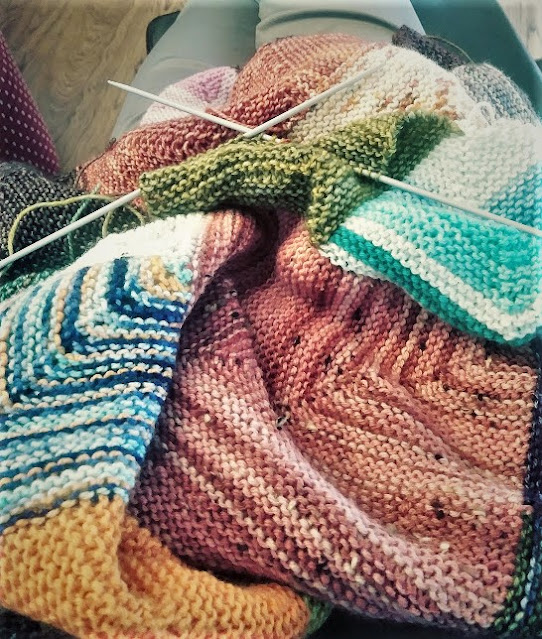 3.  I can't decide what I want to knit next so I pulled out my old Rambling Rows afghan.  I'm currently on block 31 out of 55.  It's taken me almost a year to knit just slightly more than half a blanket.  Good grief!