I finished Felix last weekend and had planned on showing him to you today but I realized I'd forgotten to take any photos.  I've already worn him twice so he may have to get washed first.  Oops.

So, with no Felix photos, today's Three on Thursday is three random things instead of three knitting things. 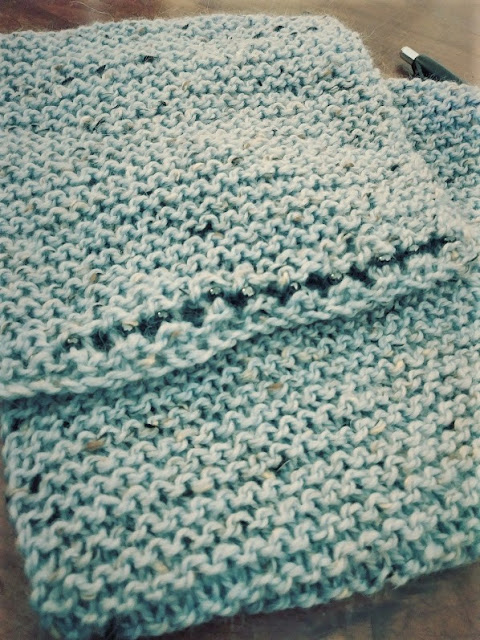 I started a simple, slightly beaded, garter stitch scarf.  I'd planned to use this City Tweed DK yarn for fingerless mitts but I wasn't feeling the urge to use dpns so I cast on a scarf instead.  I'm pretty happy with it.  I don't normally like plain garter stitch scarves but I feel like the single row of beads sort of dresses it up a little.  And the color is going to look great with my new coat.

But as luck and spontaneous, poor planning would have it, I don't have enough yarn.  I started with two skeins and knit to the end of the first.  The scarf is approximately a third of the length it needs to be.  Argh.  So now I'm awaiting another skein of Coastal and a contrasting color skein just in case the dye lots don't jive with each other.

I already know the new skein won't be the same dye lot.   Knit Pick's customer service amazes me.  I'd put a note on my order requesting the dye lot I needed if possible.  They no longer have it and called me to see if I wanted to change my order.  Anyway, if the new skein is  too far off the color of the old, I'm going to add a white skein in and pretend I'd intended the scarf to be color blocked. 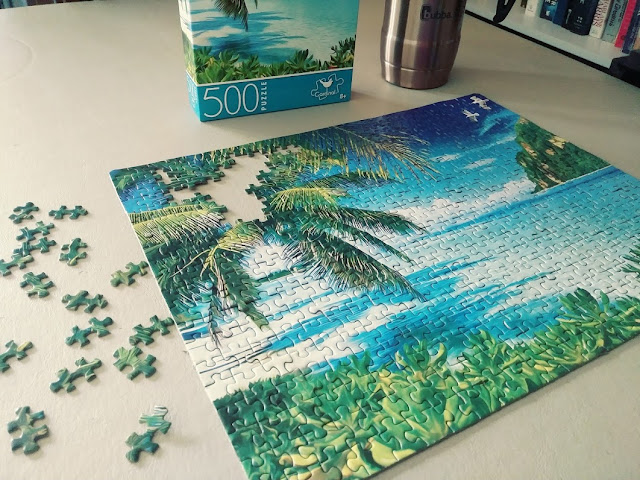 To all the puzzle affectionados out there, first, darn you for blogging about all your puzzles and getting me hooked.  I'm puzzle-ing almost as much as I'm knitting these days.  And second, I discovered puzzles in Target's dollar bin section.  They are $3.00 and 500 pieces and well, they are three dollar puzzles but whatever.  At the rate I'm working puzzles, I'm a lot better off spending $3 on a 500  piece puzzle that takes me a week to put together because the pieces bend and well, they're the quality you'd expect from a $3 puzzle vs. $12 on a 1,000 piece puzzle I put together in two or three days.  But the point is, Target has cheap puzzles if you're desperate. 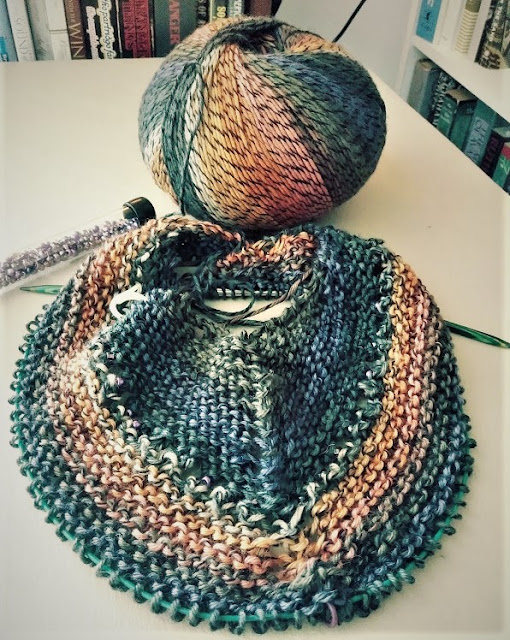 While I was digging out the beads for the City Tweed scarf, I found beads that I thought would look good with this yarn.  Knowing that I was probably going to have to wait for a yarn shipment before I could finish the scarf, I went ahead and started a beaded shawl too.

There's no official pattern involved, just a heart shaped shawl with a single beaded, *K2tog,YO* row thrown in every so often.  The yarn is On-Line from my LYS.

Center of the Yarniverse