Can we make Three on Tuesday a thing?

First of all, sometimes my ignorance completely astounds me.  Did you notice the super fuzzy and off colored photos in the last few posts?  Once or twice I didn't even post something because the photos were so bad.  And then it finally dawned on me.

Good grief!  I'd spent several days babysitting Hayden and her favorite thing to play with is a phone.  If she sees a cell phone, she makes a bee-line for it.  We can't even take photos of her anymore because she gets so excited over the sight of the phone and comes crawling/climbing and yes folks, stumbling towards it.  Hayden is starting to walk!  I laugh and pity her parents every time I think about it.  Ten months old, LOVES cell phones and starting to walk.  Her poor, poor parents!

Second, I'm happy to hear so many of you are also Gilmore Girls fans.  As for you Team Dean-ers, well, yes, he treated her well and he was cute and he got along with Rory's mom but he was WAY too possessive.  It seemed a little stalkerish, almost abusive, there at the end of their relationship.  And he was always quick to pick a fight.  It worried me what married life would have been like with him.

As for Jesse, he was horrible to her while they were dating, but it seemed he'd never had a decent role model.  Yes, he grew up and matured into a right decent young man and he's who I would have picked for her to marry.

But Logan will always be my favorite.  He was fun, brought her out of her shell and well, let's face it.  I've always had a thing for the bad boys.  I will admit though, I was pretty disappointed in him in that comeback season. 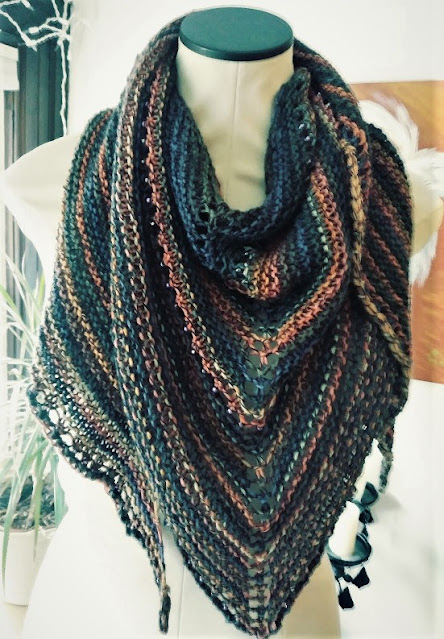 And third, I did in fact finish the beading on the shawl.  I even blocked it the same day I finished it and I've worn it a few times since.  I absolutely love it!

The beads are there, but they blend in and don't appear blingy at all.  I was slightly disappointed that the purple sections of yarn didn't stand out more.  But, the fact that it didn't turn out orange and purple striped means that it doesn't scream Halloween and I'm happy about that.  Anyway, I love it and have worn it which answers the question of whether I'd list it for sale in my Etsy shop or not.

And now, well, now I have to go try to think of three more things to talk about on Thursday.