I'll apologize in advance if this turns ranty.  Have you had the pleasure of going to the DMV during covid? 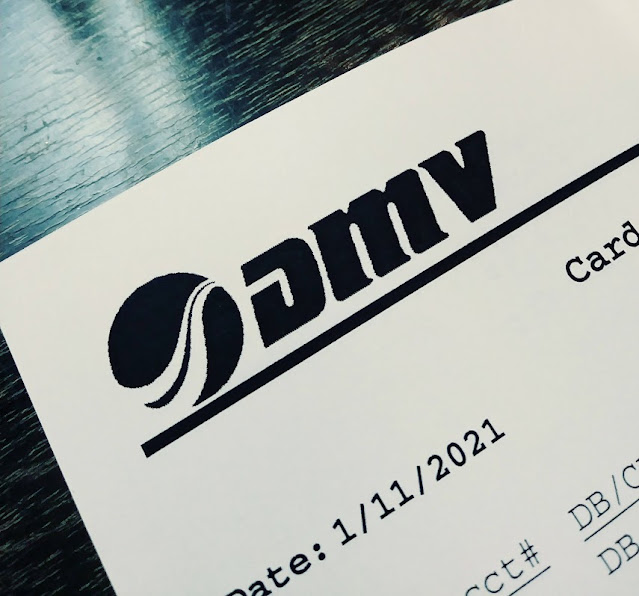 So instead of spending yesterday knitting, I drove the hour and twenty minute trip (there were lots of small, one lane, twisty-turny back roads and 25 mph speed limits involved.  It wasn't a bad drive though.  I got to go across seven big bridges over big water.  Two of the bridges were draw bridges and thankfully they were closed to boats and open for cars in both directions.  I had good music and really, it wasn't a bad drive, just a bit long for a trip to the DMV.

I arrived at the DMV 30 minutes before my appointment because I'd left home a little early in case I got lost.  Sometimes my GPS sends me on wild goose chases.

I stood in line while it lightly rained and three different old men argued with the DMV lady who was guarding the door.  None of them had appointments and they were each pretty angry that she couldn't just take care of their issues for them.  I felt pretty sorry for that poor woman.  Lord knows how many times a day she has to deal with argumentative people without appointments.  She handled it well though.

I filled out my paper work and only waited a few minutes for my turn at the counter.  Once I got to the counter, I was told that because my license had expired, even though it was covid times and DMV had been closed at the time, and I'd made the first available appointment, I had to have my birth certificate and my marriage license to renew my drivers license.  Of course I did not have either of those two things with me.

Thankfully, I was able to pay the DMV $28 to have them print a birth certificate and marriage license for me.  Why they couldn't just see it on the screen for free rather than printing them for $28 is beyond me but hey - I now have extra originals if I ever need them.

Once I had the printed paperwork in hand, I passed the eye exam, got my photo taken twice because the cashier didn't like the first one, (You know it had to have been a BAD photo if the DMV people didn't like it! 😏) forked over a few hundred dollars, received my temporary drivers license and my three car registrations and hit the road for the journey home.

When I got home, I looked at the receipts and noticed that I'd had to pay late fees for each of the three car registrations.  Late fees on something I was unable to pay for on time because the DMV hadn't been open.  Good Lord!  Only our government could get away with something like that.

Oh well.  The experience is behind me.  I didn't get lost.  I got out of the house.  I saw big water.  I have the trill of looking forward to seeing what my new license photo will look like in five to ten days (assuming the USPS can manage to deliver the mail,) and I won't have to deal with the DMV for another year.

Now, I think I'll go knit so that my next blog post can hopefully be a little more interesting.  And knitting related.