Well, now I have a dilemma.  I'm not sure what to call the event I attended this past Saturday.  The Second Annual James River Yarn Crawl was originally scheduled for May but was postponed until September due to Covid.  Stupid Covid!  And because things still aren't totally back to normal yet, the crawl went virtual and got renamed James River Yarn Scroll.  So my question is, do I call it the "second annual" or is it a first?  It's questions like that that drive me crazy.

But the important part is, I attended the James River Yarn Crawl/Scroll in person on Saturday.  It was "Visit your LYS" day anyway so....  I only went to two of the shops participating.  I promised myself I was only going to buy one skein from each shop.  I still haven't knit the yarn I purchased at last year's crawl.  Good grief!

So, one skein.  One skein from each shop was all I was allowed. 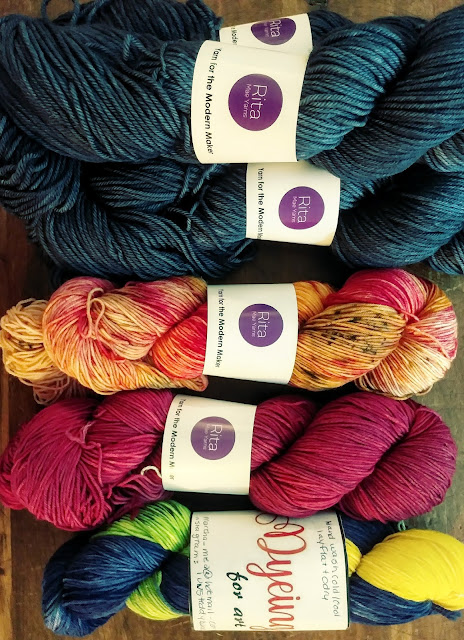 Darn Rita Mae Yarns!  Rita Mae Yarns was having a trunk show at Yarn Matters and well....  I went to Yarn Matters specifically for the Sunshine on the James River skein from Dyeing for Art but.... Somehow, five skeins from Rita Mae Yarns came home with me also.  The very moment I saw it, I had to have the red and organgey skeins.  It turns out, they were specially died for the crawl as well.  Since Yarn Matters is in Williamsburg, Virginia, the red is named Brick House and the tangerine speckled is Dog Street.  Dog Street is a street in Williamsburg and who wouldn't love to knit with yarn named Dog Street?

And then I saw that gray.  Its name is Blue Steel and it is THE most gorgeous purpley, blueish slate gray you've ever seen.  I can not wait to knit with it.  I plan to knit Anisah which you can find on Ravelry or on Rita Mae's website. 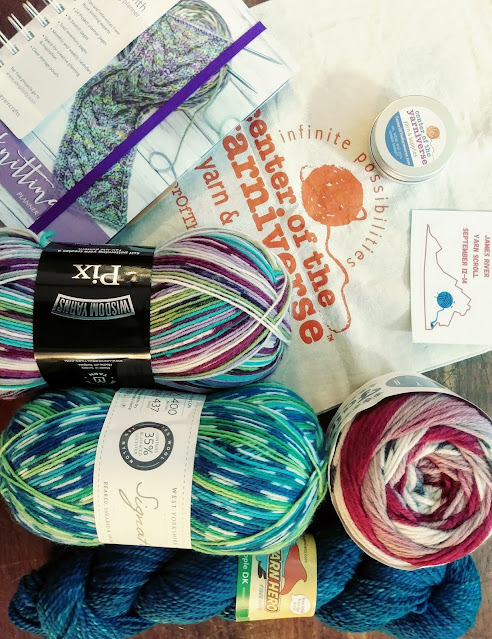 And then I went to Center of the Yarniverse in Ashland.  And of course I broke my one skein rule there.  Organized Chaos was Yarniverse's sponsored dyer.  As much as I Love their yarn, I already have a ton of it  and I wanted my one skein to be something I'd never knit with before.  I quickly found Dolpin Ride from Yarn Hero.  And then somehow three other skeins of sock yarn jumped into my arms.  I'm counting that as okay since Socktober is quickly approaching.  (We just won't mention that I already had four sock yarns on standby just waiting for October 1st to roll around.)  And then, as if three extra skeins weren't enough, a Knitting Planner jumped into my cart also.  I may take that back though.  I didn't notice it in the shop, but while it's a knitting planner, all the interior pages refer to crochet rather than knitting.  It's not a huge deal but.... 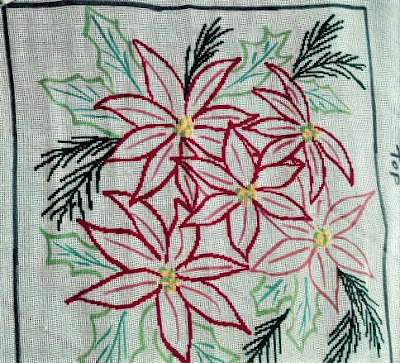 So, I'm now the proud owner of ten new skeins of yarn... And I haven't knit a single stitch in almost a week.  I've been needlepointing instead.

Years and years and years ago I bought two pickup truck loads of yarn and various fiber arts 'stuff' from an estate sale.  And in that pile of 'various fiber arts stuff' was five or six large Christmasy needlepoint canvases.  Well, last week, I had one of those light bulb moments - I could use Palette from Knit Picks instead of trying to track down needlepoint wool.  It's basically the same thing except Palette is much, much cheaper and I already had all I needed except for two colors.  Yay!

So to make a long story a tiny bit longer, I hopped in my car, drove to our storage unit, dug around until I found the canvases and brought them home.  And I've been obsessively needlepointing ever since.  The Palette is working out perfectly and I can't wait for the petal red to arrive so I can start filling in those leaves.