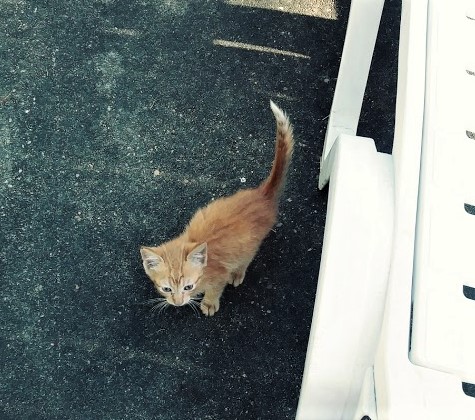 Every morning I get my coffee and go sit on the deck by the pool to do my morning pages.  Do you do morning pages?  You should!  Okay, so 99 days out of 100, what I write is pure dribble, it's normally me whining about something... But on that 100th day, gosh!  Every now and then, some kind of mind boggling, life altering realization hits me and comes out in my writing.  I haven't even been doing them all that long, just a few months now, but I've already had four or five of those light bulb moments that have completely changed my life in some way.
But as excited as I am about discovering morning pages, I'm getting off track.  Let's get back to extreme cuteness overload.
So, yesterday morning I stepped out on the deck and could hear a cat meowing.  It sounded trapped and slightly desperate.  There are a few feral cats in the neighborhood that we see occasionally so I was looking for them.  Couldn't figure out where the meowing was coming from, but eventually I realized it was coming from under the house.  I opened the locked trap door and, yes!  The meowing was definitely coming from deep in that dark, spider webby space.
How did a cat get into that locked space??
I opened the trapdoor wide and started, "Here kitty, kittying."  Then my imagination took over and I started thinking, what if a bobcat has had babies under there?  (It's not unusual to see a bobcat near our swamp.)  So I took a few steps back and kept on "Here kitty, kittying."
I could hear it getting closer and closer and I was becoming more and more convinced some huge, giant, very aggressive mama was going to come flying out at me and I took a few more steps back.  I know, I know, I'm ridiculous, but I hadn't had the first sip of coffee yet and well, ya'll know I have that unnatural fear of panthers hiding out in the trees.  If it's possible for panthers to stalk me from the tree tops, it's certainly possible a bobcat has had babies under our house.
So, I'm stepping further and further back and the meowing is coming closer and closer....
And suddenly....
THE cutest little kitten came creeping out of the darkness. 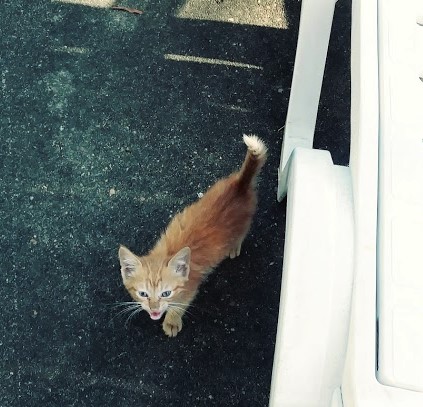 I thought he was feral and he hissed at me once, but I put my hand out for him and he quickly came over and let me touch him.  Within minutes he was letting me scratch his head and pet him and he began purring and twinning himself around my ankles.
The little guy is so stinking adorable!  He's only about six inches tall, and about that in length too.  He is so dang sweet and is not the least bit feral.  He's definitely missing his human(s) and maybe his mama.
It is killing me that we can't keep him but Mike is horribly allergic to cats and Sarah has a slight allergy.  I posted his picture on a couple of Facebook groups and my page in hopes someone would claim or want him.  I also called Animal Control (our county's Animal Control are super nice and kind.) but they don't have anyone on duty until Monday.  And of course, the SPCA won't take him.  They say you have to hand over any unwanted animals to Animal Control.
So, until Monday, I'm a kitten mama.  Actually, Sarah has claimed that title.  She says I can be Kitten Grandma.
In other words, there will be no Sunday Supper tonight.  I'm too busy playing with my four-legged grandchild.

Email ThisBlogThis!Share to TwitterShare to FacebookShare to Pinterest
Labels: #mylife