I don't think there's an actual link up going on today, but that doesn't mean I can't still post three random things on a Thursday. 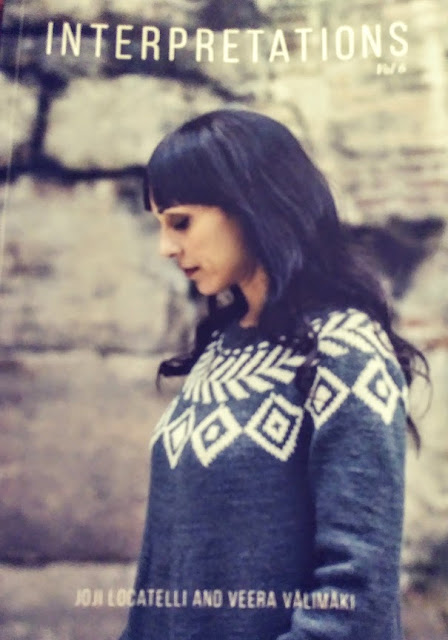 I accidentally bought a new knitting book the other day.  I don't feel too terribly guilty about it because I plan to knit that sweater on the cover.  I bought some yarn last week for a colorwork sweater without having a pattern in mind.  Now I have a plan.  I just have to finish the mohair sweater first.

We had a little excitement around here the other day.  You know how the news always picks THE most redneck, derelict, uneducated people to interview?  They chose well the other day.

It was the day I had that nauseous blurry vision headache and I'd been laying down, bra-less of course, and without hair clips or pony tails so when the doorbell sounded and I jumped up, I looked like some kind of crazed psycho-killer witch haired woman.  And first, you have to understand how exciting it is for our doorbell to ring.  It's only the second time in over nine months that someone has rung it.  We are country people.  Everyone comes to our back door.  Even the Jehovah Witnesses come to our back door.

So the doorbell rang, I jumped up and saw the Channel 6 news vehicle out front.  Cool!  I went to the door, still bra-less and still looking like a psycho-killer with wild witch hair and probably with pillow marks on my face... and couldn't get the door open.  The lock is approximately 100 years old, literally, and we've been having trouble with it lately.  Well, it refused to open.  So the news guy and I are yelling through the glass door at each other.  And Sarah comes along with a sarcastic comment about how I don't know how to open the door... and of course she was wearing some weird, even by stay at home covid standards, weird outfit.  But she couldn't open it either.  And Mike comes along, in his underwear because he'd injured his knee at work and he'd been laying down icing it and well, I don't know why he was in his underwear, but he was.  He struggled with the door and after a few very loud and very vulgar curse words, got it open.

So there we are, me bra-less and crazy haired, Sarah in a weird covid outfit and Mike cursing in his underwear, talking to the news guy.  Apparently a man from the next county over had gone missing and his car was found only a 100-ish yards from our house.  The news guy was wondering if we knew anything.  We didn't.  But it was quite exciting to report that.

You know you are living the covid life when not knowing about a missing guy's abandoned car is exciting and a major conversation piece at the next three meals.

If you are interested, here's the most recent Channel 6 news article. 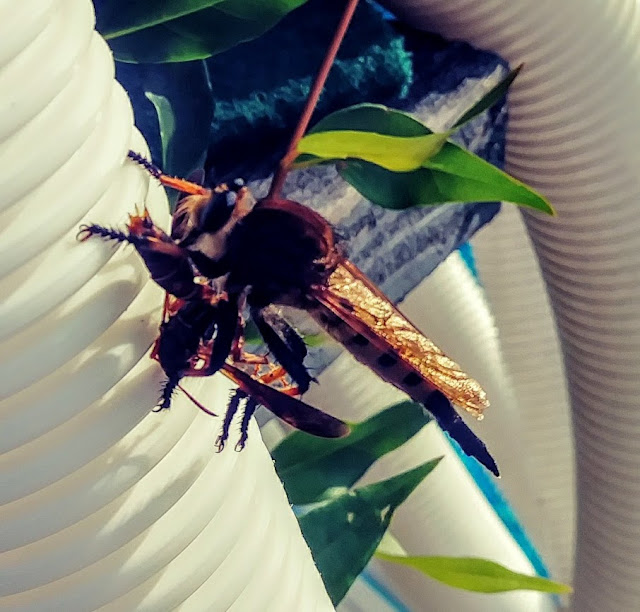 In an attempt to beat the excitement of someone ringing our doorbell, this guy dropped in for a visit.  I don't know what he is but he's fearless.  He's eating a wasp!  I'm not sure if that makes him my best friend or my worst nightmare.  I definitely don't want to tangle with a bug that has a cicada head, a dragon fly body and eats wasps.  And not only is he eating the wasp, he carried the wasp to that location.

It's been a very exciting week!

Email ThisBlogThis!Share to TwitterShare to FacebookShare to Pinterest
Labels: #mylife, Three on Thursday