Yesterday was a pretty good day! 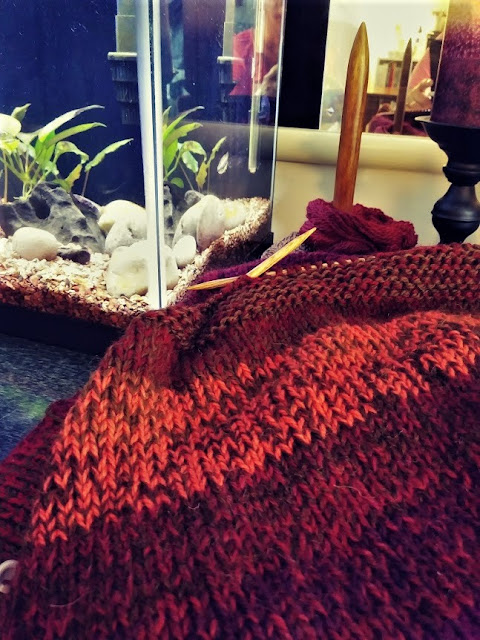 Despite the rain having finally stopped, I spent most of the day inside watching the fish and knitting.  I'm not exactly pleased with that orange stripe, but I wasn't happy with the first orange stripe either and I've grown to like it so there's hope.  Whether I like it or not, I'm continuing on with this sweater.

I'm deviating from the pattern quite a bit.  I decided to do a garter stitched split hem instead of ribbing at the waist.  The front is finished and the back is only a few rows from being bound off.  My plan is to do the sleeves like a Swoncho with the whole forearm being knit in ribbing.  It may look weird with the garter stitch waist hem but I didn't think about the sleeves until after I'd started the hem and well, the whole sweater is going to look a little weird anyway.  I really don't think it will matter. 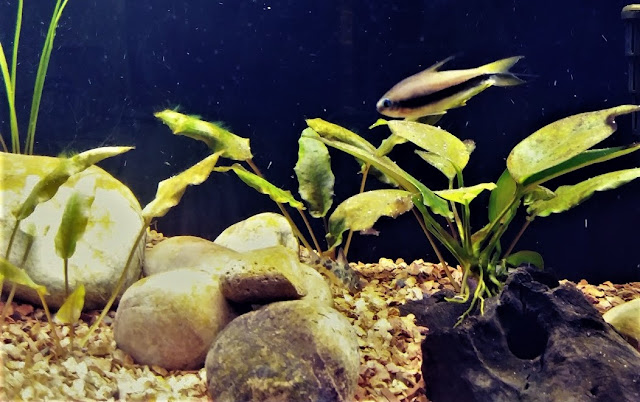 I'm sure you are wondering why I was obsessed with watching my fish all day.   Doris and Charlie spawned.  Can you see the teeny tiny white things on some of the leaves?  It sort of looks like course salt was spilled over them. 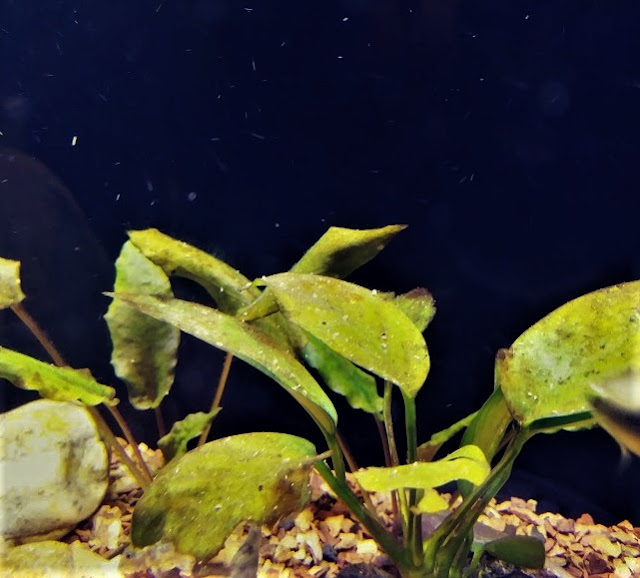 Is that better?  The camera on my phone just isn't that great and the leaves move in the water and every photo I take is slightly blurry.

I always watch the fish while I do my morning pages and the tank was all clear when I finished writing.  I went for a walk and came back to find the leaves dusted with eggs and the water full of floating ones.  Tetras lay their eggs by "substratum egg scattering" which means they just drop them and let them land where they may.

At least that's what I hope happened.  Charlie and Doris were showing typical breeding behavior the night before so I'm fairly sure they were eggs and not something horribly wrong in the tank.  What ever they were, they are gone now.  The corys won't need to be fed for a week because they ate every single one of them.

And yes, my tetras have names now.  Charlie is the leader of the pack and is named after Charles Manson.  He's the only cult type leader I could think of and while I hope he doesn't turn out to be a fish murderer, the name sort of fits.  His followers seem to love him, but he has a bit of a mean streak and as much as they love him, they are also slightly afraid of him.  And he's definitely the leader of the group.

Doris is Charlie's girlfriend.  The two of them have definitely paired up.  Doris gets her name from Greek mythology.  She is Amphitrite's mother (Amphitrite was Poseidon's wife) and daughter of Oceanus.  I chose the name Doris because I could pronounce it.  :)

Then there's Fabio, so named because he's pretty and isn't as camera shy as the others.

And since Charlie and Doris had hooked up and Fabio seemed a little lonely, I bought another female - Viviane.  Viviane is another name The Lady of the Lake went by.  Besides being a King Arthur fan, the tank Viviane was in at the pet store looked a bit like a lake so...

As for the corys, they don't have names yet.  I can't tell them apart.  I can't even tell if they are male or female.  Despite being from the catfish family, they will probably get typical dog names because they remind me of puppies.  They are fairly round with shortish tales and they look like excited puppies the way their tales constantly wiggle.  They are either wiggling or grouped together on the bottom sleeping.  Either way, I haven't been able to get a close enough look at them to compare their details.

Sorry, but I warned you that you were about to know more about fish than you ever wanted to know.

And...  I bet you'd forgotten - this is a post about good things that happened yesterday... 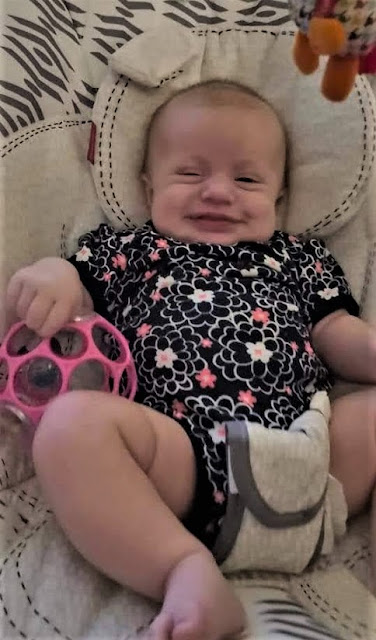 Hayden is learning to laugh.
Posted by Jeannie Gray Knits at 6:30 AM