My daughter will probably kill me in my sleep for sharing these, but I couldn't resist.

In a recent attempt to avoid cleaning up what ever it was that exploded in the microwave and was left to harden into a cement like mass, I decided to purge my file cabinet.  In the process, I came across a few letters Sarah had written when she was younger.  I hope you find them as humorous as I do.

The first, a Father's Day poem for her dad. 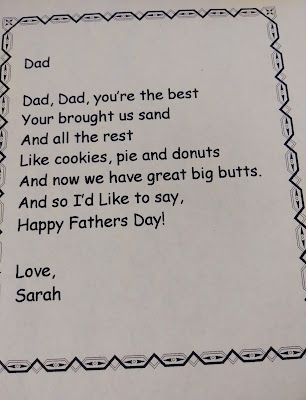 This is a photo copy.  The original is framed and hangs over my husband's desk.  As a point of reference, Mike's office used to be next door to a bakery and he'd bring home yummy goodness several times a week. He also brought truck loads of sand home occasionally for the kids' sandbox. The poem reads:

Dad, Dad, you're the best
Your brought us sand
And all the rest
Like cookies, pie and donuts
and now we have great big butts.
And so I'd like to say,
Happy Father's Day!

Next up is a letter to Santa that was found in Sarah's stocking late one Christmas Eve. 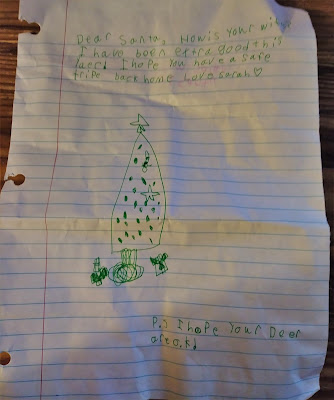 It reads, "Dear Santa,  How's your wife?  I have been extra good this yaer! I hope you have a safe tripe back home.  Love Sarah   P.S I hope your deer are ok!"

And last, we have a letter regarding her feelings towards her brother. 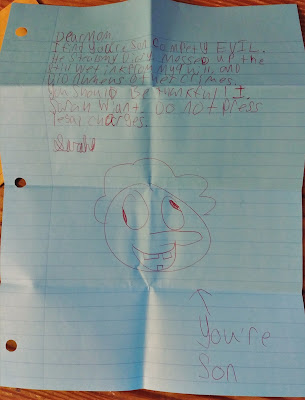 "Dear Mom,
I find you're son completely EVIL. He steals my diary, messed up the still wet ink from my 9 hill (I have no idea what that is supposed to say, but that's what it looks like.) and did numeus (numerous) other crimes.  You should be thankful I, Sarah Wiant, DO NOT press legal charges.
Sarah"

Although I saved these masterpieces, I failed to date them.  I'm kicking myself for that now.  Sarah must have been eight or nine.  She had mastered the your/you're thing by the time she was ten or eleven and she obviously hadn't when writing these.  She had to have been at least eight when she wrote the evil brother letter though, because she'd put it in an envelope and written our return address on it.

Join me over at Carole's for the Three on Thursday link up.
Posted by Jeannie Gray Knits at 6:30 AM