This is better than Christmas!

A couple of weeks ago, I received a box in the mail.


What would be in it?  I felt like I was opening my Christmas stocking.


Santa KnitCrate sent me 300 yards of a bison/merino blend yarn ("Tracks") from The Buffalo Wool Co.  Yes, you read that right - bison!  I've never knit with bison before.  I can't wait to knit with it.  It looks a little like cotton but I have the feeling it's going to bloom once washed and become crazy-soft.

I'll admit, I was a little worried about the yarn.  A few days before the package arrived, the sock pattern (which was part of the package) arrived via email.  Now, being my first package from KnitCrate, I wasn't sure what to expect, but the photo on the pattern was showing a shockingly pink sock.  I'm not really a pink kind of girl and I'll admit, I was a little disappointed that my first shipment was probably going to be shockingly pink yarn that I would never use.  But it turns out, the yarn isn't shockingly pink at all.  It's a brownish coral.  The label calls it Spring Salmon.  I call it perfect!

Also included in the package were the cutest, tiniest pair of travel scissors and an electronic row counter. 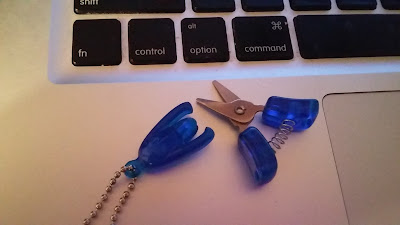 I mean, look how tiny the scissors are!  Aren't they adorable?  They're not much bigger than a key on my laptop!  And yet, they cut yarn better than my full sized desk scissors.  I'm in awe!

I can't wait to start knitting with the Tracks yarn.  I had to hide it from myself so that I'd finish Christmas knitting.  But lucky for me..... Since I gave up trying to knit the cowl from Hell and decided to buy the recipient's gift.... that means I don't have to knit that recipient's spouse a gift either.  Excellent!  Two gifts instantly struck off the Gifts To Knit list.  And that means, unless I'm forgetting someone (which I probably am. I always do,) I am finished gift knitting!  Done!  Finished! Fini!

And you know what that means.....  I get to go play with coral colored bison!
Posted by Jeannie Gray Knits at 8:00 AM