It's been a busy week work-wise which means, I've got nothing much to talk about here.  The highlight of my week was....


New Fish made a 'bubble nest' in his bowl.  I was a little frustrated because he did it the day after I cleaned his bowl.  His water and bowl had been sparkly clean & clear, then suddenly, the water turned cloudy & a good portion of the surface water was covered in bubbles.  Even though it looks like I need to clean his bowl again, the bubbles are a good thing.  They mean he's happy.  I'm happy New Fish is happy.  I'd just be happier if his water was still crystal clear.

And yeah, I know what you're thinking.....  bubbles were the highlight of my week???  Sadly, yes.      As I said, work's been busy.  Our air conditioning at work caught fire a few weeks ago & it's looking like they aren't going to fix it until the off season.  The other night, around midnight, it was 87 degrees in the office.  That was definitely not a highlight.

I donated blood but didn't pass out or even get woozy so no drama there.  No drama could qualify as a highlight but it's a pretty boring one so I'm not counting it.

I got a new shower curtain.  But it's just plain white so I can't count that either.

It's pretty pathetic that bubbles & cloudy fish water were the most exciting thing.

One somewhat exciting thing is my Great White status.


I'm making progress.  It's looking like I will only need four or five more rows of blocks.  Not rows, but rows of blocks.  I'm still a ways away from the finish line, but the end is in sight.  That is pretty exciting actually.  Miles & miles of ecru acrylic yarn just don't thrill me so knowing I'm on the downhill side of the 'thing' makes me happy. 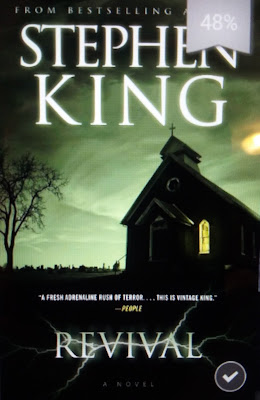 I did start reading another Stephen King novel.  Even though I'm at the 48% mark according to my Kindle, I'm still not sure what the book is about.  I mean, I know there's a very young boy who meets the new preacher and as the boy ages, tragedies strike....  but I haven't quite figured out what the book is actually about.  It's just started to get the typical Stephen King 'woo-woo weird' vibe.  I take that back.  From the first few pages when the young boy meets the preacher....  I started to worry.  I've been constantly on edge waiting to see what Mr. King's imagination does to the preacher.   I'm assuming the preacher will turn out to be some kind of evil force simply because it's a Stephen King novel but who knows.  I'll just have to keep reading.  I did find it interesting that the main character worked at Joyland for a while.  I love how Mr. King ties all his books together with simple mentions of places & people.

To find out what others are knitting and reading, stop by Ginny's weekly Yarn Along.
Posted by Jeannie Gray Knits at 9:00 AM