Today I'm giving thanks for two things.  The first is that I've stuck with this Giving Thanks thing, at least so far.  I'll be the first to admit that when I publicly declare that I will do X on certain days, it's pretty much a guarantee that I will never, ever do X again.  But so far, so good.  I'm quite thankful for the Blogging Gods or the Gods of Public Declaration or who ever it is in my head nudging me to put the knitting down & turn off Netflix for a few minutes each day so I can write these posts. 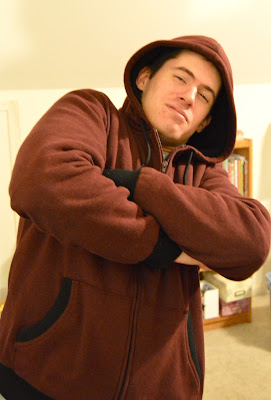 He's feeling pretty smug about it.  Or at least he was until I suggested he use it to buy me some yarn.

Meanwhile, I knit another hat.


I absolutely love the finished results of this one.  The yarn is Patons Classic Wool in the Light Grey Marl colorway.  Every single time I go to the yarn store, this wool taunts me.  I love the colorway in the skein but I'm rarely happy with the way tweedy yarns look knit up.  Each time I visit the yarn shop, I pet a skein of the Light Grey Marl, tell it how pretty it is, then move on because I know I'll be unhappy once I start knitting with it.  But on the last trip, the yarn fumes got to me and I tossed a skein into my basket.  And I'm so glad I did.
Posted by Jeannie Gray Knits at 12:12 PM