Orange is the New Black

Are you an Orange is the New Black fan?  Although I wasn't that wild about the second season, I was looking forward to the third.  And I got pretty dang, jumping up & down excited when I discovered there was an OITNB mystery-KAL (knit-along.)   I immediately ordered my kit (yarn and a link to the M-KAL/instructions.)  When I placed my order, the website said the yarn was in stock but two days later, I received an email saying that the yarn was not in stock & I'd have to wait for more to be dyed.  I was just a tad bit irritated, specially since I just happened to have June 13th off from work and June 13th was the day the third season would air.  I could binge watch all day, without even having to call in sick from work.  Or so I had thought. 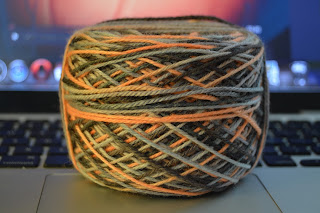 My yarn finally arrived June 23rd, I immediately followed the link to find the instructions and.... wasn't that impressed.  Because I was so late starting, there were tons of spoiler photos already posted on the website, which turned out to be a good thing.  The MKAL instructions turned out to be for a shawl that just wasn't me.  Plus, it mentioned there was a good chance you'd need two skeins of yarn although the kit only included one.  So, instead of knitting the MKAL, I decided to knit a cowl.  I grabbed a couple of coordinating skeins from the stash pile and cast on during the opening OITNB credits. 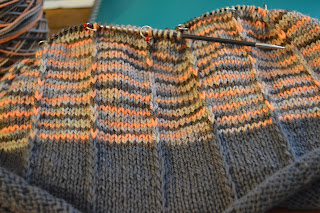 It's just a simple, stockinette pattern with a few slipped stitches thrown in to create prison bars.

And no, the color is not off in the photo.  Instead of orange and black, the yarn is peach and grays.  Which I'm actually happy about.  I think the peach and gray combo will be much more wearable than an orange & black cowl.  An orange & black combo would probably look to Halloweenish.  Besides, the peach & grays are sort of dull, muted colors much like the colors of the OITNB prison.

Anyway, I'm happy with the colors and the yarn itself (it's a Lorna's Lace sport weight yarn) and the knitting project has outlasted the binge watching.  Yes!  I had two days off this week and spent them binge watching OITNB and knitting instead of going to the grocery store.  I will pay the price when I end up starving to death this week because there are no groceries in the house, but, I can now happily join the OITNB discussions at work.  It's a fairly decent trade off, I think.
Posted by Jeannie Gray Knits at 8:30 AM