I think it's obvious I've already reached my summer slump as far as the blog is concerned.  I can't even remember the last time I posted something knitting related and if I'm going to be honest, the Thursday #TBT posts are all written & prescheduled way ahead of time.  There's been lots of drama preventing me from not only posting, but also from knitting.

First, it's sort of been too hot to knit. 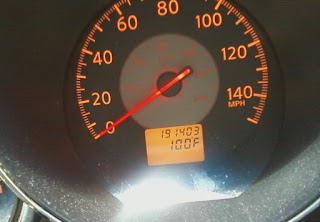 And oddly, my car's mileage indicator pretty much equals the recent humidity levels.

And because it's been 100 degrees and a gazillion trillion percent humidity, our house's air conditioning unit died.  It took a week to get the new part and once the new part was installed, we discovered something else was wrong & the new part instantly shorted out.  A week later...  two new parts arrived and hopefully, keep your fingers (and toes!) crossed, we have working a/c once again.

And of course, since it was 100 degrees and a gazillion trillion percent humidity, one of our vehicle's radiators had to bust a gut.  Thank goodness the hubby is handy with a screwdriver and was able to replace the radiator in a matter of hours.

We've had extended family health issues to think about, so rather than knitting & thinking about that, I spent a rare 100 degrees and a gazillion trillion percent humidity day off at the lake trying to get a tan while not being struck by lightening.  Have I mentioned the crazy thunder storms we've been having? 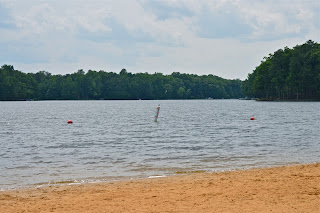 And then there's been work.  Work has been taking up more time than usual.  We've been understaffed & the staff we do have are mostly all newbies so each shift is taking three, sometimes five or six hours longer than normal.  Have I mentioned the job is not a normal eight hour shift, it's a 'stay till the work is finished' shift.  Anyway, instead of leaving work at 2:00 or 3:00 a.m., there have been many, many 5:00, 6:00, even 7:00 a.m. clock-outs.  And no matter what time I clocked out for the previous shift, I still have to clock in at the same time each afternoon.  And, on top of longer shifts, I've been busier during the shifts so I haven't had much at-work knitting time.  Anyway, the point is, work has cut into my knitting and blogging time.   I will admit though - the paychecks are nice.  Those extra hours are funding a lot of extra yarn shopping.

It's also been so hot, my work uniform belt melted.  Have I mentioned it's been 100 degrees with a gazillion trillion percent humidity?  I really think my leather belt melted.  There was nothing wrong with it when I put it on in the morning and after spending a shift in what I have renamed The Hot Box, the belt suddenly broke.  Not the buckle, not where the buckle joins the leather.  But the leather itself just suddenly tore in half.  I swear I think it melted.

Because of the belt melt-down, I spent this week's day off shopping for a new one.  I ended up at the local Bass Pro Shop (because I want a pair of hiking boots they have, but that's a whole other story.)  Sarah went with me & we got silly doing the 'tourist thing' in the store. 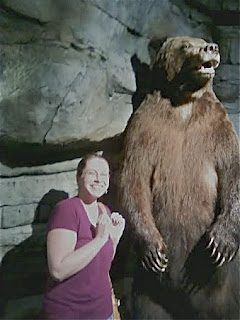 We laughed at how she didn't want to get too close to Mr. Bear. 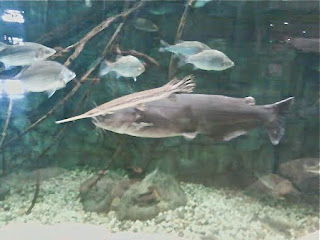 And she was so freaked out by this big fish, she wouldn't even get close enough to the tank for me to get her in the photo.  Sarah is NOT a fan of big fish.  She wigs out over them like I wig out over spiders.  In all honesty, it was a creepy looking fish.  Dead eyes, huge mouth.  Pretty creepy.

So, all in all, I haven't gotten much knitting done lately.  I did finish the striped cowl knit with leftover Hawthorne yarn, 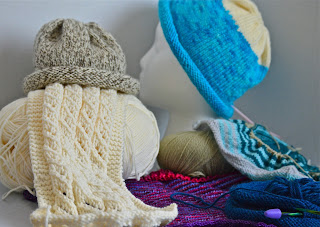 I knit a couple of simple, rolled brim hats, both of which need to be over-dyed.  I'm disappointed to have to re-dye the blue one.  I'd used food coloring to dye what I thought was enough yarn to knit a hat, but I was way off on yardage.  I love the way the yarn had splotches of darker color and I hope I can recreate that effect.  I started another simple, rolled brim hat in a deep, royal blue that is my current 'at work' knitting project.  I also picked back up a creamy colored lace scarf that has been in the stash pile for a long time.  And, I started a striped Thing.  I'm still not sure what the Thing will be.  When I cast it on, it was going to be a felted bag but it may end up being a cowl.  Or maybe even a sweater body.  I haven't decided.  Or more truthfully, the yarn just hasn't told me what it wants to be yet.

And now, I have to go get ready for work, put on the new belt, and go face the weather.  Have I mentioned it's 100 degrees and a gazillion trillion percent humidity out there?
Posted by Jeannie Gray Knits at 7:02 AM