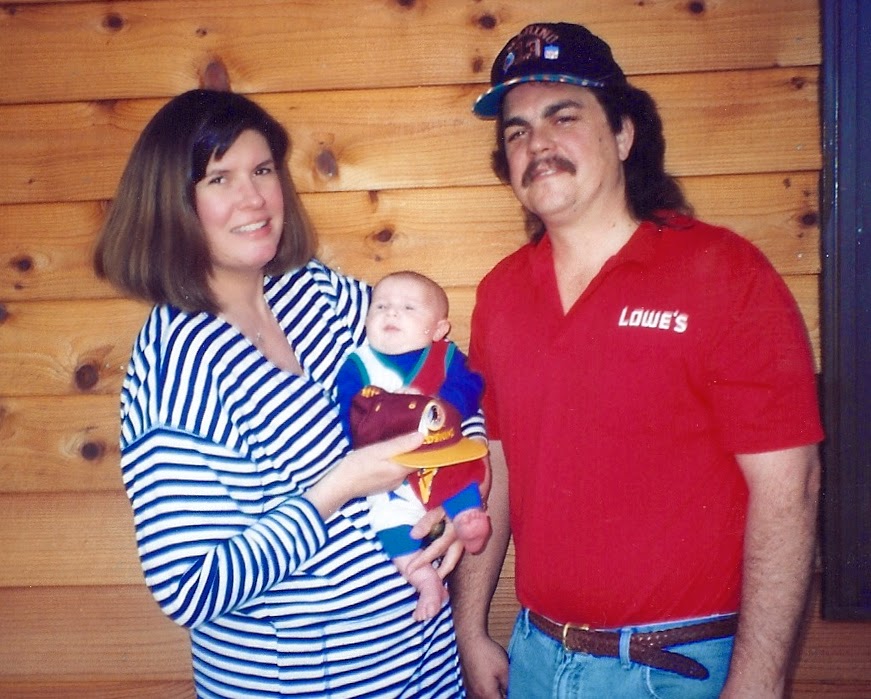 Twenty years ago today, Lowe's helped bring our first born into this world.  The story isn't quite as dramatic as that sounds, but it's still a fun, memorable birth story.

Around 4 or 5 in the morning on the day before my official due date, I woke up with, for the public's sake, let's just call it "weirdness."  I grabbed my baby birthing bible and learned that I would most likely go into labor within the next 24 hours.  I woke up the husband and sent him off to work with a "hurry, get your job done & get back home" message.  At the time, his workplace was about 120 miles from home.  Off he went and I went about my normal morning routine which consisted of laying on the couch, watching TV & knitting.  (I was on "couch" rest which was a modified version of bed rest.  I was allowed quick trips to the kitchen and to lay on the couch instead of total bed rest.)

An hour or so later, I kept having a weird sensation in/on my belly.  Not cramps, not contractions, not even squeezes, but almost like a gentle massaging sensation.  An hour or so after that started, I started leaking fluid.  When you are as hugely pregnant as I was and you're carrying the next David Beckham who seems to think your bladder is a soccer ball, it's not unusual to .... let's just say, leak.  But it kept happening.  It still wasn't the "OMG! My water broke!" gush that the birthing class video had shown but it was enough to send me diving back into the bible for more information.

The bible said to go to the hospital, it was almost Time.  I called the doctor and he agreed but said that I didn't have to be in a huge rush.  I started paging (remember pagers??) and calling my husband.  Of course, he didn't respond.  After a couple of hours of not being able to reach him, I called his family.  His family turned out to be blood hounds.  They not only went in search of him themselves (they lived close by where he was working) but they also got the plant's security crew looking for him.  Finally, Michael (he was Michael, not Mike by that time) called me back.  Meanwhile, while everyone had been out looking for Mike, the doctor's office had decided that I if I didn't have a ride to the hospital within the hour, I needed to call an ambulance.  And of course, it was one of those days where not a single neighbor or friend were home or answering their phones.

Anyway, Mike finally calls me back, I tell him the story and he decides the best plan of action is for  Mike's Lowe's salesman to give me a ride.  He'd been an EMT in another lifetime and lived in our neighborhood.  So I called Kevin and he agreed to come get me.  Of course, instead of showing up in his old, rusted up pickup truck, he showed up in his wife's brand new, two-seater sports car.  My "leak" had been steadily getting heavier and I thought we'd drown before we got to the hospital.

Once we got to the hospital, the nursing staff was determined to strip me naked in front of Kevin.  They didn't quite understand that he was my husband's Lowe's salesman, not my actual husband.  Kevin was finally allowed to escape, I was allowed to keep a teeny tiny shred of dignity and Michael finally arrived.  And then we waited.  And waited.  And waited.

We pretty much skipped that whole me cussing at my husband birthing scene they always show on TV.  We went from me happily eating ice chips while we watched TV to me pushing for 3+ hours (yes, THREE plus freaking hours!) to an emergency c-section to get the stuck child out of me.

But the whole point of this story is, the Lowe's tag line at the time was "Lowe's Delivers."  And since Lowe's helped deliver me to the hospital, that picture was published in Lowe's employee newsletter.

So, Kevin, where ever you are today, thank you for playing such an important role in our first born's birthing experience.  And Zachary, happy 20th birthday!

Posted by Jeannie Gray Knits at 9:00 AM