Do you put on a hat and go to church on Sundays?  I don't.  I was raised in the Episcopal church and Episcopalians don't wear hats.  But Baptists do and there was a Baptist church right down the street from the house I grew up in.  The Baptists' service also started much later than the Episcopal service.   One of my fond childhood memories is coming home from church & sitting on the front porch with my dad and watching the Baptists walk past on their way to their church.  And they all wore hats.

But neither religion nor "Sunday go to meeting" hats, which is what my dad called them, have anything to do with this post.  I just needed a title and I haven't had quite enough coffee to come up with anything more creative than Sunday Hats.

My summer job will be starting soon, well, in two months, but that feels really soon.  The last couple of summers, I've let the blog fall by the wayside while I worked every waking hour.  Last year, so much time passed between posts that I forgot my password at one point.  I really don't want that to happen this summer.  So, I'm trying to come up with ideas for short, simple posts that I can possibly write in advance & schedule into the automatic posting feature that Blogger offers.  Normally I don't like to write the posts in advance but the reality of my summer is that it must be done.  So....

My plan is to post a link to a hat pattern once a week.  I picked Sundays because hats tend to remind me of sitting on the porch & drinking a Coke with my dad while we watched hat wearers walk by.  I picked hats to feature, rather than say, scarves, because, well, because a lot of reasons.  Hats are universal.  Men, women, teens, little kids and even babies wear them.  Hat patterns can be simple things and can be knit in an hour or two, or they can be extremely complicated and take ages to knit.    You only have to knit one so there's no danger of second sock (or mitten) syndrome.  They don't take much yarn so they tend to be economical.  And the number one reason for focusing on hats is that there's a local shelter who's always looking for hat donations.  On the off chance that I actually knit each of the patterns that I share and I end up with 50+ hats at the end of the year, I'll have something to do with them.

So....  all that was a super duper long way of saying, here, I'm sharing a hat pattern.  The hat is called Xing Xs and it's published by Rose-Kim Knits.  The pattern appears to be super simple with one little design element that changes it from just another boring hat into something special.  And it's free!

Today on my needles... 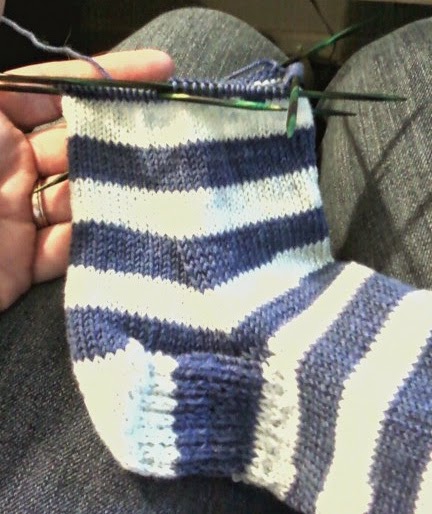 An almost finished sock.  Tomorrow, it will probably be an Xing X's hat.
Posted by Jeannie Gray Knits at 10:08 AM