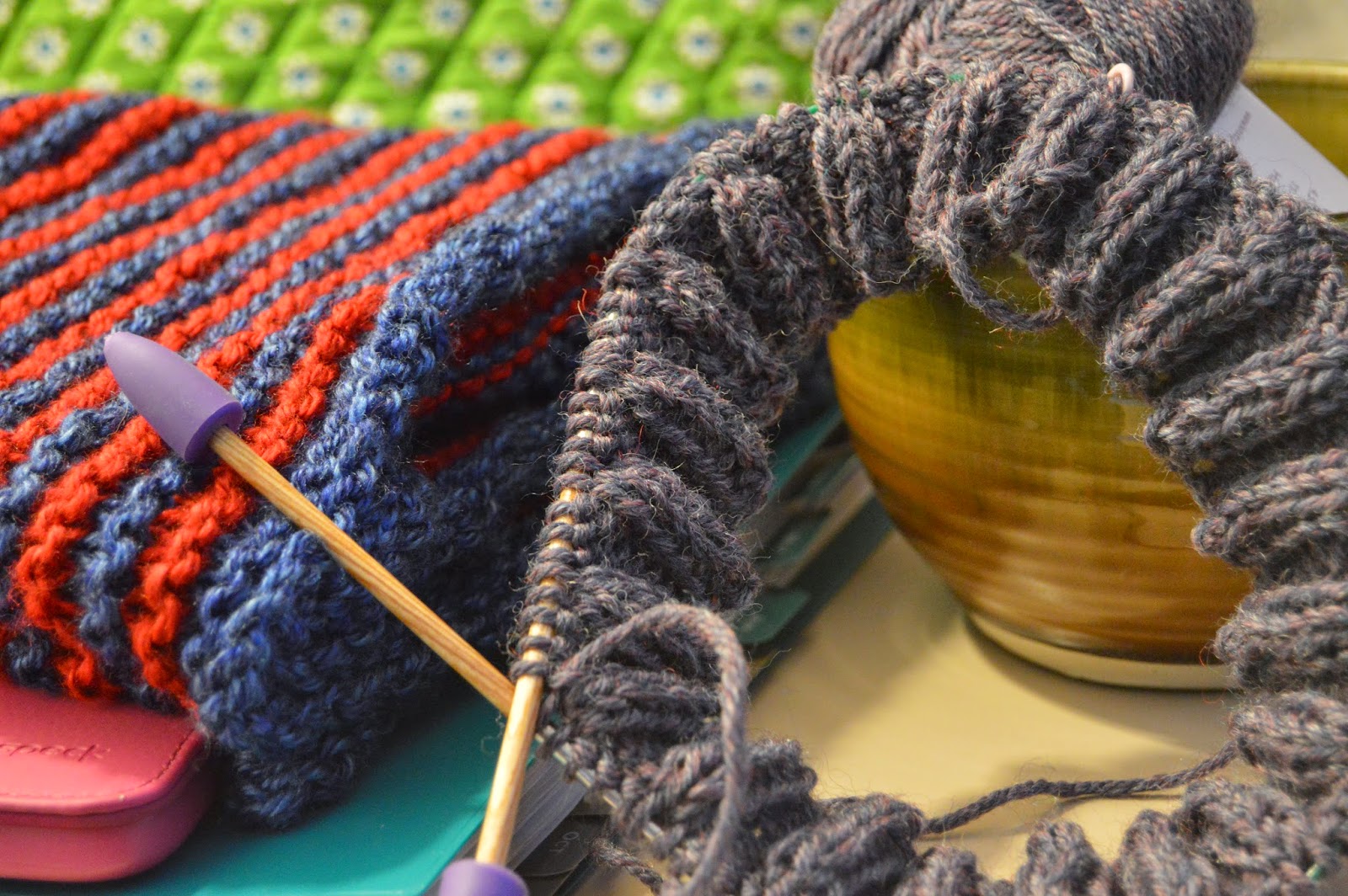 I finished the blue & red striped scarf last night & started another hat.  I knit the scarf with the intention of listing it in my Etsy shop but I think I'm going to keep it for myself.

I'm a bit surprised at my love for the scarf.  It was knit with Lion Brand Heartland yarn from Walmart (gasp!!) that I'd bought in one of those low moments where I had to buy yarn, Now!, matter what kind it was.  I just needed NEEDED yarn.  Secondly, I didn't have a pattern or do a gauge swatch.  I simply cast on enough stitches to cover the length of cable needle I was using, added a few more stitches & started knitting.  The only plan I had was that it would be 2 row stripes.  Except that plan went out the window on the third row.  I forgot to change colors.  And, I realized that doh! With nothing more than knit stitches, the edges would curl.  Doh!  All I can say is that it was well after midnight when I started it and maybe I was suffering from a post Christmas cookie & chocolate high.  Anyway, I threw in a purl row for texture, called it a pattern, not a mistake, & went with it.  When I decided it was wide enough & I would cast off on the next row, I got totally absorbed in an episode of Gilmore Girls and kept knitting.  When I finally did cast off, I discovered the scarf was a perfect fit for me.  Absolutely perfect.  It's wide enough to be warm when hanging loose around my neck (it's a fake infinity scarf, as in, a circle without the infinity twist) and when I wrap it around my neck a second time, it fits perfectly.  Not too tight, not too loose & it doesn't give me that weird "Look, Ma, I'm a turtle" look that many of the popular, bulky infinity scarves provide.  And, amazingly, the cheap acrylic yarn from Walmart feels nice.

Hmmm, maybe I really am sick.  I just hope they don't kick me out of the yarn snob club for admitting that I'm happy with the scarf.

The next project was supposed to be another pi shawl but I was six hours into binge watching Gilmore Girls, it was after 2 a.m., and I didn't want to get up to go in search of lace weight yarn.  So, I grabbed a skein of Wool of the Andes in the Mineral Heather colorway that happened to be at arms reach & cast on using a 3x2 rib pattern.

And that is what's on my needles today.
Posted by Jeannie Gray Knits at 12:14 PM