So, we had a fun day at Walmart yesterday.  And by "fun" I mean I'm bouncing between livid & a Twilight Zone version of "OMG! Did that just happen?"  As I said, part of me is pretty damn irritated.  Part of me is totally creeped out and part of me is giggling over the experience.

We were having a girls day out yesterday.  "We" being myself, my friend, my daughter & my friend's daughter.  We'd shopped a while, had lunch & ended up in Walmart because the girls wanted to look at makeup & us grownups needed a few groceries.  We entered the store, the girls went one way & us grownups went the other way.  Eventually the kids texted to say they were bored, lets meet and check out.

After checking out, as we were leaving the store, we were stopped by a man in baggy pants & a sweatshirt, not a Walmart uniform.  He wasn't wearing a name tag but he had one in his hand.  (Alex.  Alex from Walmart.  And since I had just learned about the Alex from Target phenomenon a few days before, it turned on my giggle switch.)  He mumbled something & at first I thought he was asking us to complete a survey or something.  Then it became clear that he was asking if the girls were our kids.  Next we were told we had to follow him to the office because the girls had done ...mumble, mumble, mumble something we couldn't understand.

What it all boiled down to was that Alex from Walmart had seen the girls pick up an item off the discount aisle & when he saw them a few aisles later, they didn't have the item in their hands anymore.  Therefore, they must have stolen it.  The girls explained that yes, they'd picked up the item then decided against buying it & put it back.  Alex from Walmart again mumbles his story about how the girls must have stolen it.  The girls gave their story.  Alex repeated his mumble, the girls repeated their story.  On & on this went.  Eventually my friend insisted on either speaking to the store manager or a police officer.  Conveniently for Alex from Walmart, neither was available.  Finally, he allowed us to leave with a mumbled, "we'll have to take your word for it."  No apology.  No understanding at all that someone might change their mind about buying something.  Not to mention this guy had apparently followed our girls around the store for almost an hour.  That just creeps me out.  And it upsets me that we were made to follow this guy, who wasn't wearing a uniform or a name tag into an out of the way office.

I have boycotted Christmas shopping at Walmart before & I am prepared to do it again.

So now, I'm off to calm myself down with some knitting.  And tease my daughter about going from jailbait to jailbird over night.

What am I knitting you ask? 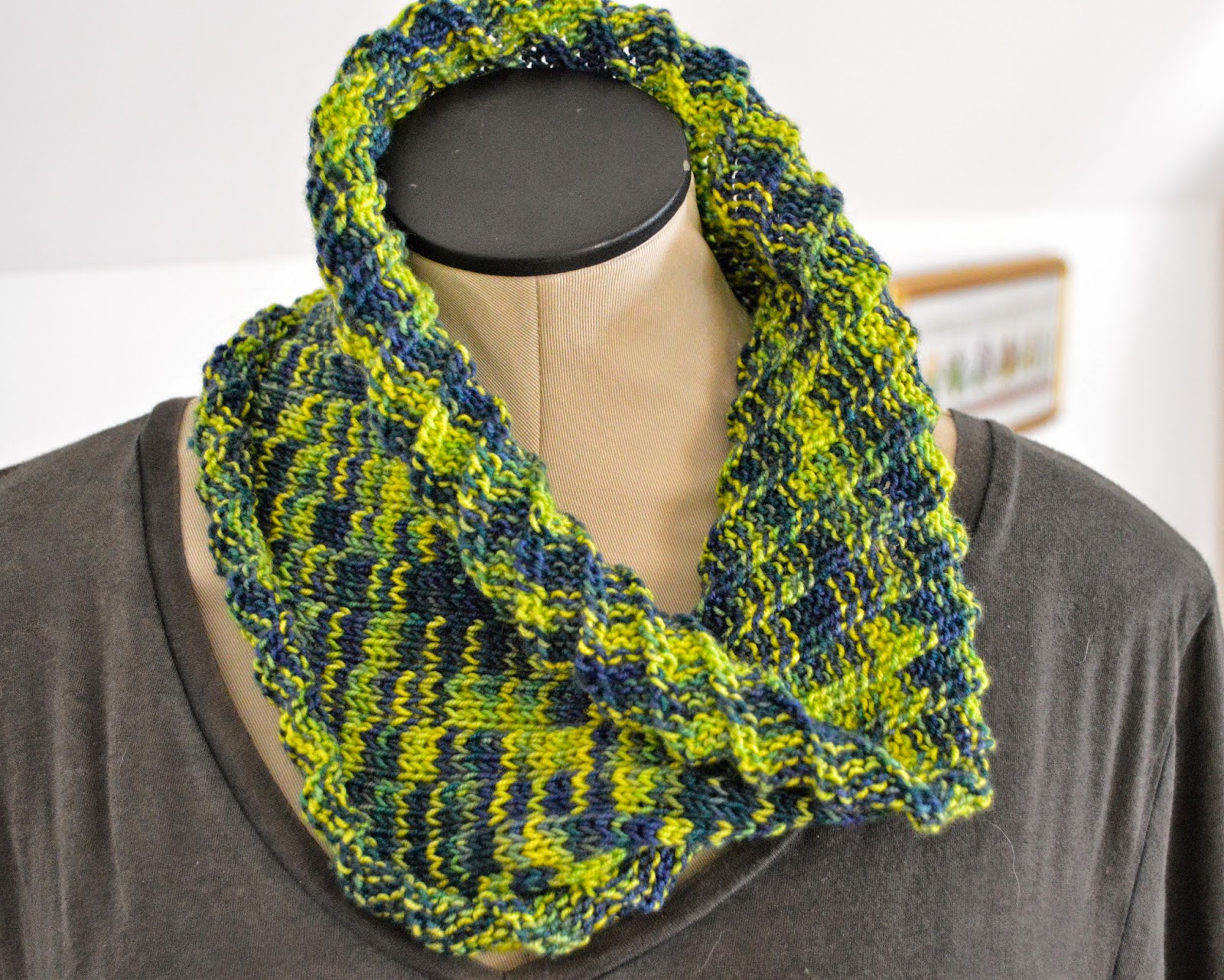 The Flying Monkeys cowl is finished & has already been worn, thus the stray hair hanging off it.  Why is it that those stray hairs are never seen until you are about to publish the picture? 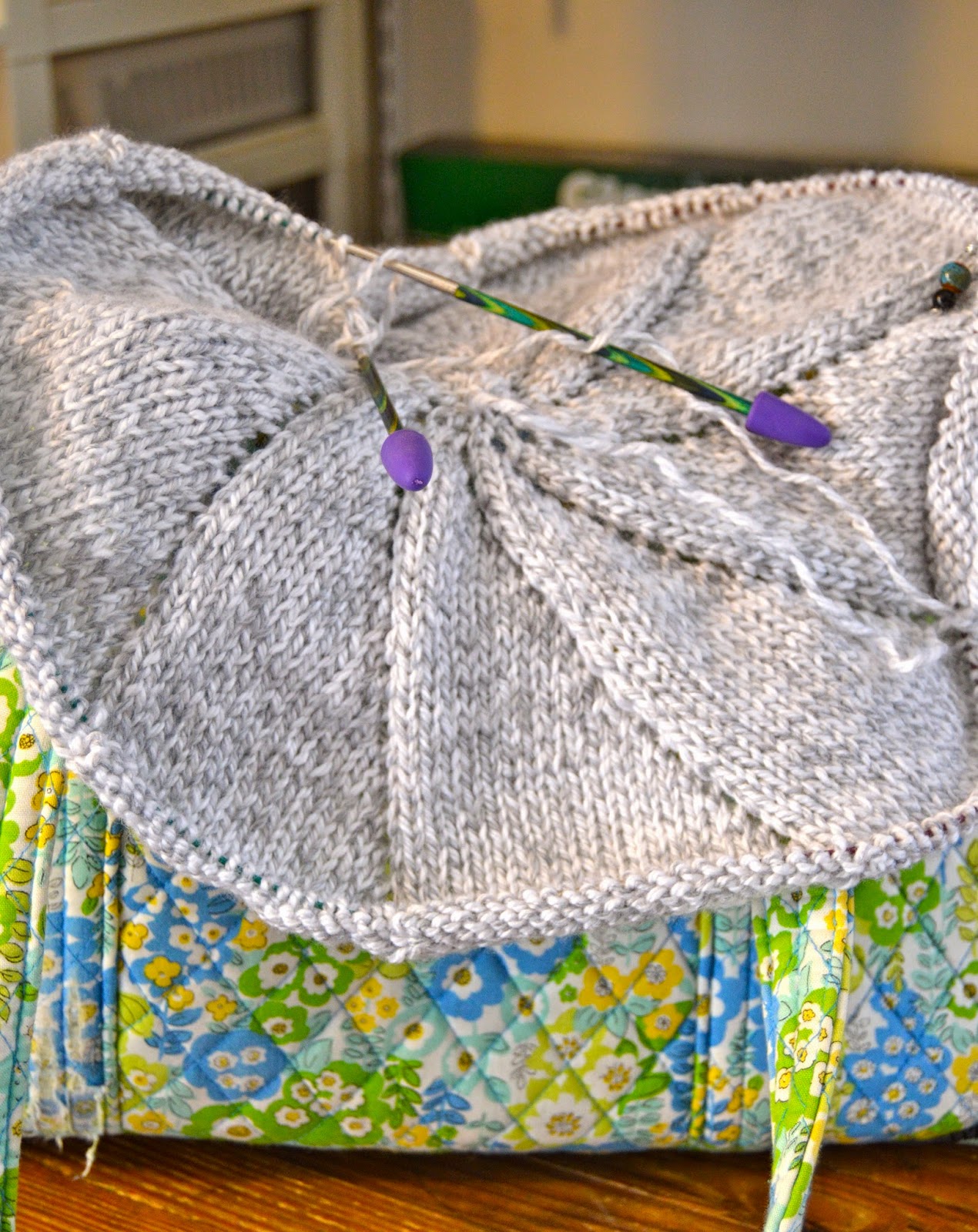 This is the new project but it's a secret so I won't be going into a lot of detail, not before Christmas at least.  Can you guess what it's going to be?

Thinking about Walmart got me so worked up I forgot to be thankful.  And honestly, I'm so upset over the whole Walmart experience that I can't think thankful thoughts at the moment.  About all I can think of to be thankful for is that my daughter & I have the type of relationship where she can tell me, in a calm nontypical teen tantrum manner that I hurt her feelings for not totally trusting her & even considering that what Alex from Walmart accused her of might be true.  I hope she understands that my actions did not imply distrust, they were simply a bad reaction to a surreal, WTF moment.
Posted by Jeannie Gray Knits at 10:53 AM