It's TBT & as you can see, my bad hair days continued through the pre-teen years. 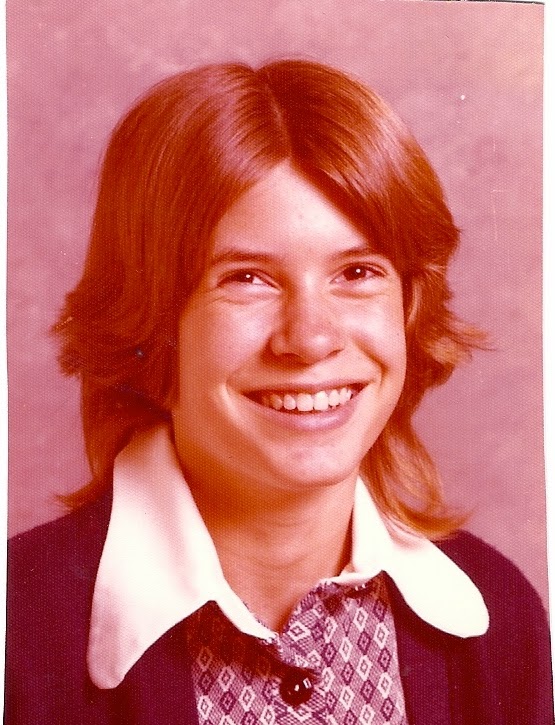 Lately, my knitting has been almost as bad as my hair.  I finally realized that the sleeping bag striped scarf I was knitting was not going to work.  It was just way too wide.  The realization came during knitting group the other night.  I was glancing through a group member's pattern book & started laughing at how ridiculous a model looked in her super wide cowl.  And that's when it hit me.  If it looks ridiculous on the model, how's my sleeping bag scarf going to look on me?  Not to be defeated, the sleeping bag scarf is now a tote bag waiting to be felted.  No photos at the moment - we are going to the State Fair this evening & the camera battery is on the charger in anticipation.

The lacy cabled poncho also took a turn for the worse.  I "yo, K1"'ed instead of "yo, K2tog"'ing several rows back.  "Several" being like 20.  Argh!  At the moment, the poncho has been moved to the side, way, way off to the side, because I'm not sure I like it enough to bother fixing it.  The though of ripping it & then having to chase all the ensuing runaway yo's is just more than I can deal with at the moment.

So, at 1:00 a.m. last night (or this morning, depending on how you look at it) while re-watching the final episode of Season 1 of Buffy the Vampire Slayer (dammed Facebook quiz for making me want to rewatch the entire series!) I grabbed the ladder scarf out of the UFO  pile & got to work.  I'd put this scarf aside because the yarn had started to feel not so great in my hot, Virginia summer humidity hands.  It's cooled off a bit now though & rather than the scarf's length being in the single digits like I thought it was, it's actually about 3 1/2 feet long so far.  And that means, I might be able to finish it quickly.  After the sleeping bag & poncho setbacks, my mental state needs a project I can successfully complete.

Gosh, I hope I didn't just jinx the ladder scarf.