I'm still knitting away on my mitered square "thing." 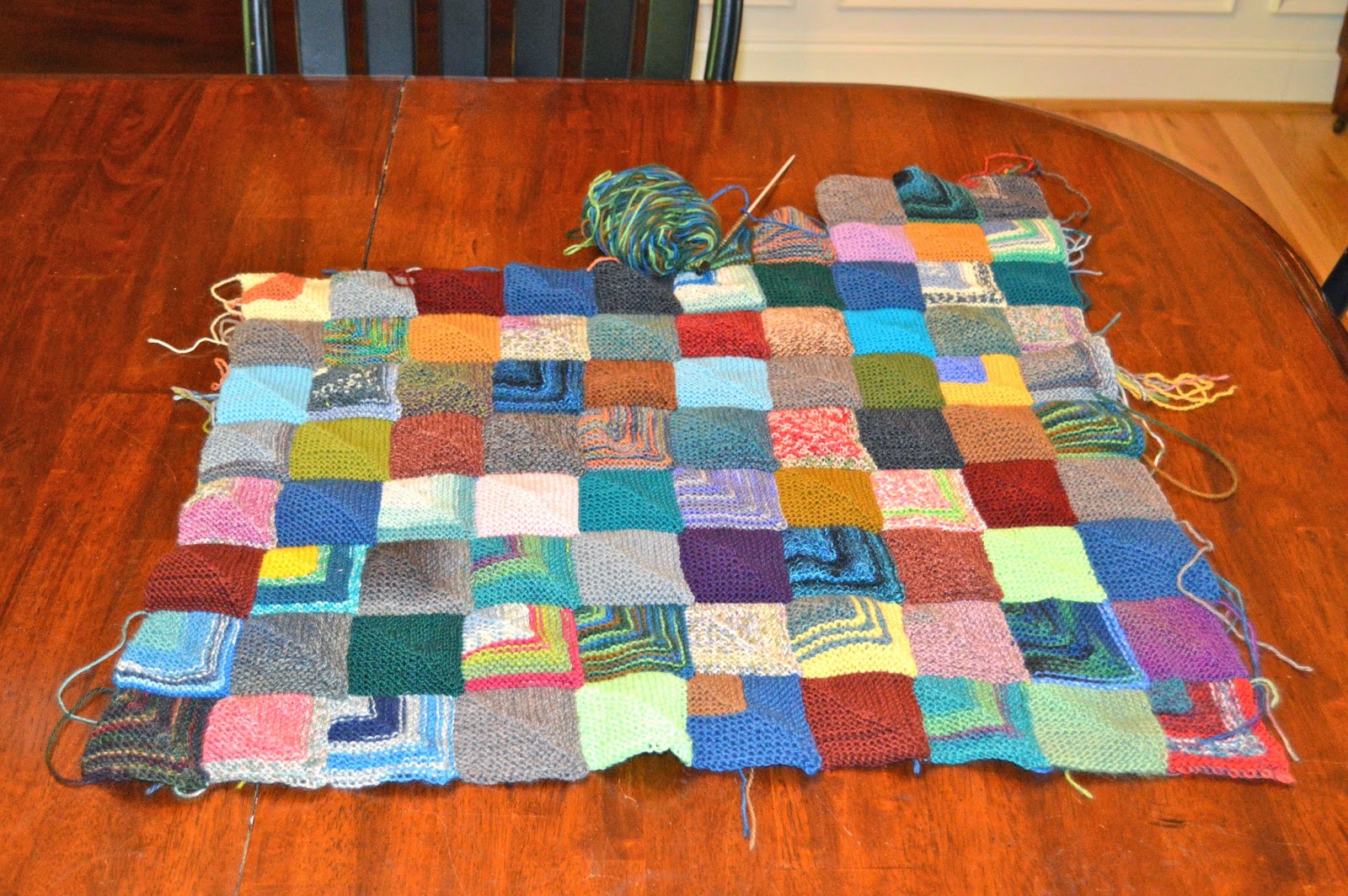 I'm currently 84 squares into it.  As you can see, it's ten squares wide & my goal is to make it 30 squares long so that it becomes a blanket rather than a "thing."  We'll see if my attention span let's it get that long.  Even with 84 squares completed so far, I haven't made a visual dent in the scrap yarn pile crate.  Having enough yarn should not be a problem.

I've received several questions about how I knit my mitered square "things" so I thought I'd try to answer a few of them.

This particular "thing" is knit with squares made from 33 cast-on stitches, fingering weight yarn & #2 needles.  Over the years & many, many different mitered square projects, I've discovered that I much prefer smaller squares to larger ones.   With larger squares, the large blocks of color stand out.  With smaller squares, all the colors tend to blend together & you don't notice one yarn's color clashing with another's as much.  And since I don't plan my colors in advance, not clashing is a good thing.  Rather than planning the colors,  I keep my scrap yarn in a large bin & just grab a ball out of one end of the bin & when I'm done with it, I toss it into the opposite end of the bin.  It's a very scientific method.

As for how I decide how many squares to put in a row....  I tend to knit five or six squares in a row, get bored & start the next row.  Sometimes I'll add on a third row.  Eventually, I come to the conclusion that my "thing" needs to be wider & I add on another four or five squares to the first row.  Next, I build the second & third rows up and I just keep adding squares in each direction until I'm happy with it's size, or, until I go yarn shopping.  When yarn shopping happens, the mitered square "thing" is considered "done" and I move on to knitting something totally different with the new yarn.   Yes, I'm monogamous with my knitting.  And that is why I call the mitered square things "things" until they are finished.  When I start one, I never know if it will be a coaster, a pillow cover, a table runner, a baby blanket or a full blown king sized bed blanket.  I should probably state here that while I dream of completing a king sized blanket, I've never come to close to making one.  Baby blanket size seems to be about as far as my attention span can cope with.  But one day....

If you are new to knitting &/or don't know anything at all about knitting mitered squares, here's a link to a  YouTube video that explains it fairly well.   There are a zillion other how to knit mitered square videos out there though so if you don't like that one, just try a different one.  It's really super simple.   I do make my center decreases slightly different though.   My preferred method is to slip one, knit two together then pass the slipped stitch over. (s1, k2tog, psso)

I am cheating on my mitered square "thing" though.  I needed an At Work project so I started a pair of socks. 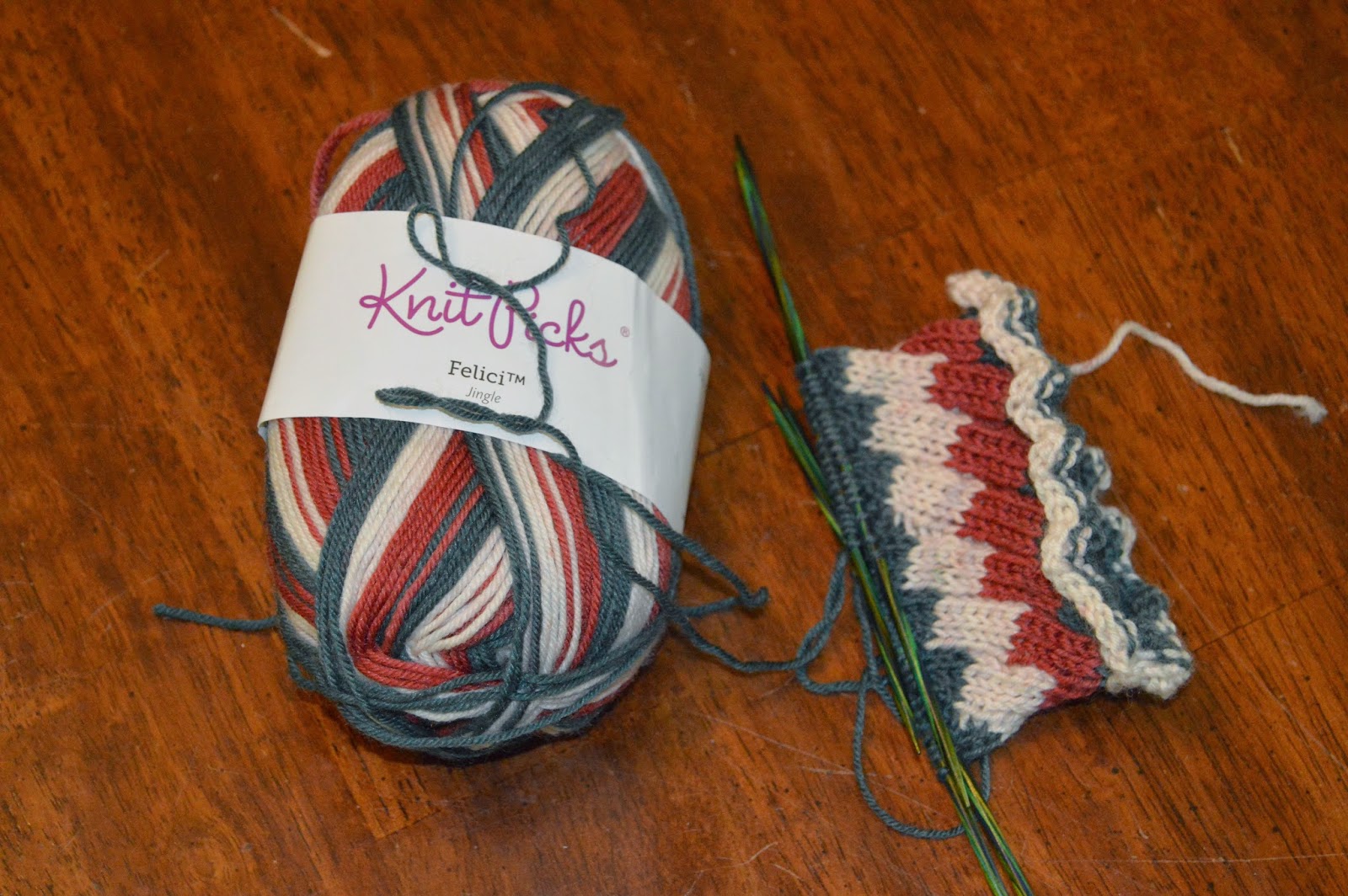 While taking that photo & realizing what a boring picture it is, I realized that the yarn & pattern would also make a cute wine bottle bag.  See? 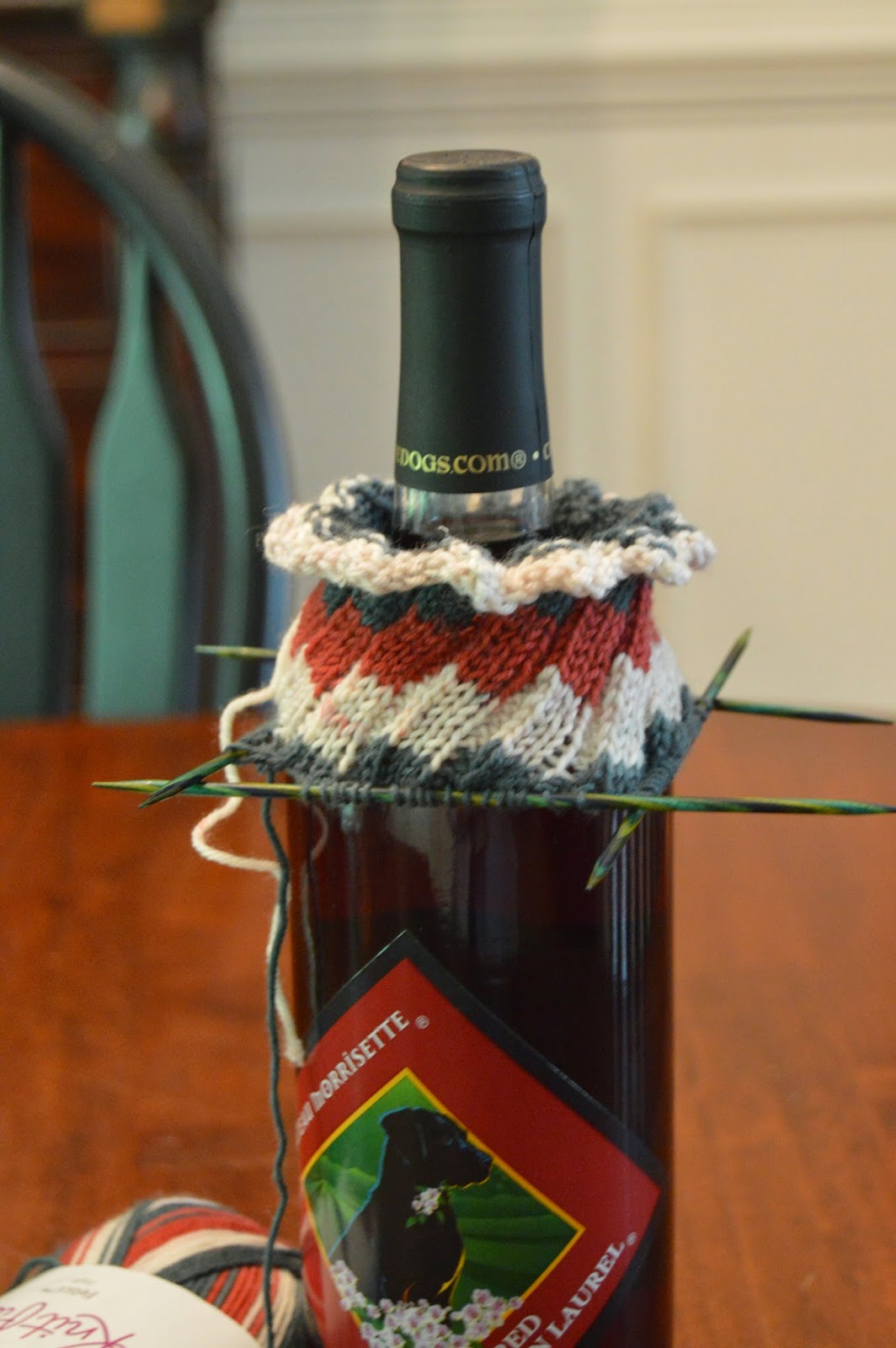 I just might have to place another yarn order, except, this yarn is a discontinued color.  KnitPicks currently has it on clearance.  Hmmm, I wonder how much they have left.  I also wonder if anyone will notice if I order from them three times in less than one week.  Hmmm....

In case you are wondering, the yarn is KnitPicks' Felicity in the Jingle colorway.  This is the first time I've knit with Felicity & am enjoying it so much I went back & ordered a bunch more in different discontinued colorways.

I'm dying to put the mitered squares away & focus on the Christmas socks but I'm forcing myself not to.  The socks are going to be strictly at work/travel knitting.  Yes, they are.  I swear!

Yeah, I'll keep telling myself that.  Right up until the next yarn order arrives.

Posted by Jeannie Gray Knits at 7:00 AM