I love snow day knitting, don't you?  They were calling for up to 30 inches of snow!  Around these parts, 3 inches is enough to cause panic at the grocery store.  I knew I needed a snow day knitting project but I wasn't feeling the love from the rainbow chevron scarf and my car was having a major hiccup so I couldn't go to the LYS to pre-storm yarn shop.  I decided to cave into the urge to start a Wendy Knits fair isle scarf of my own. 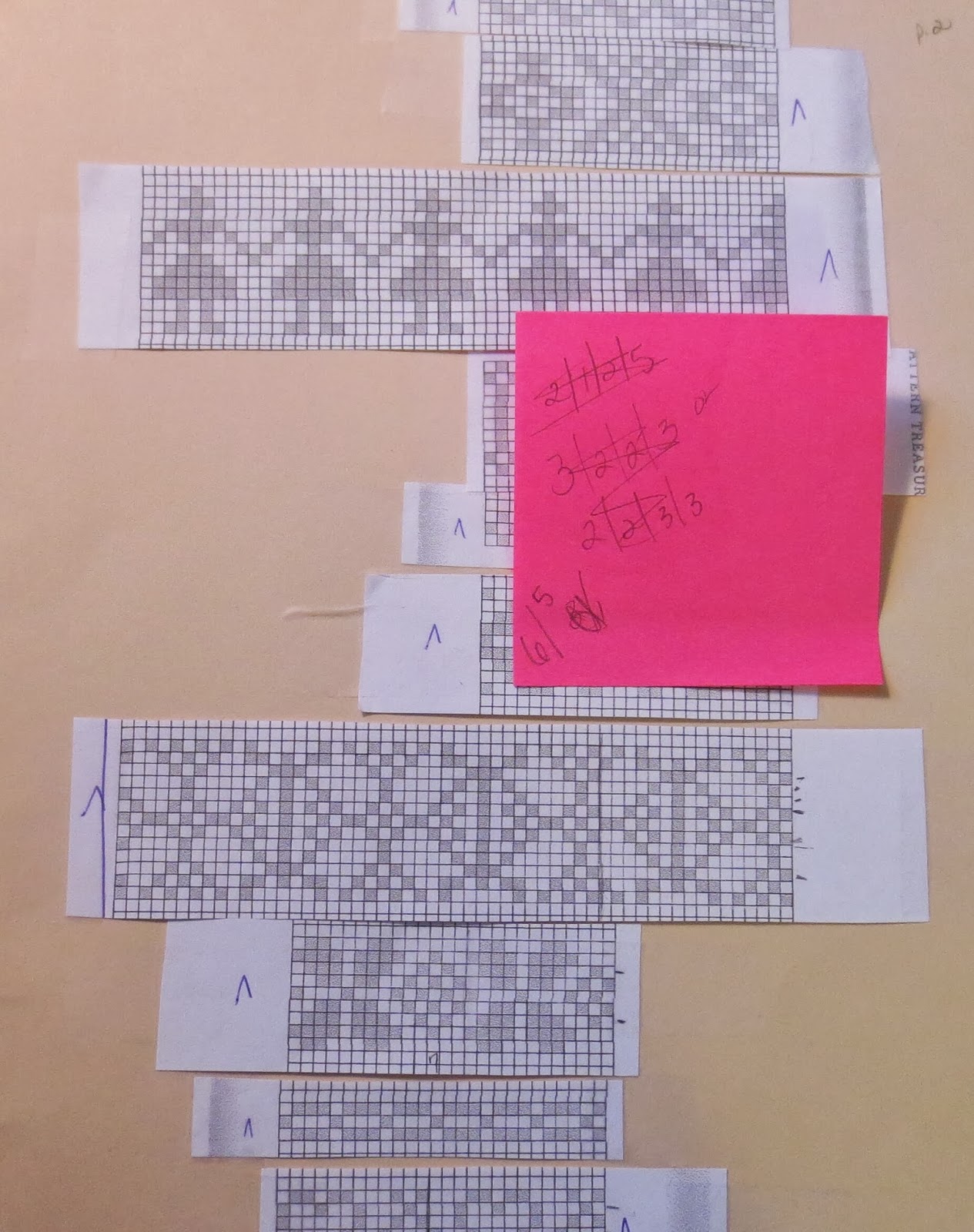 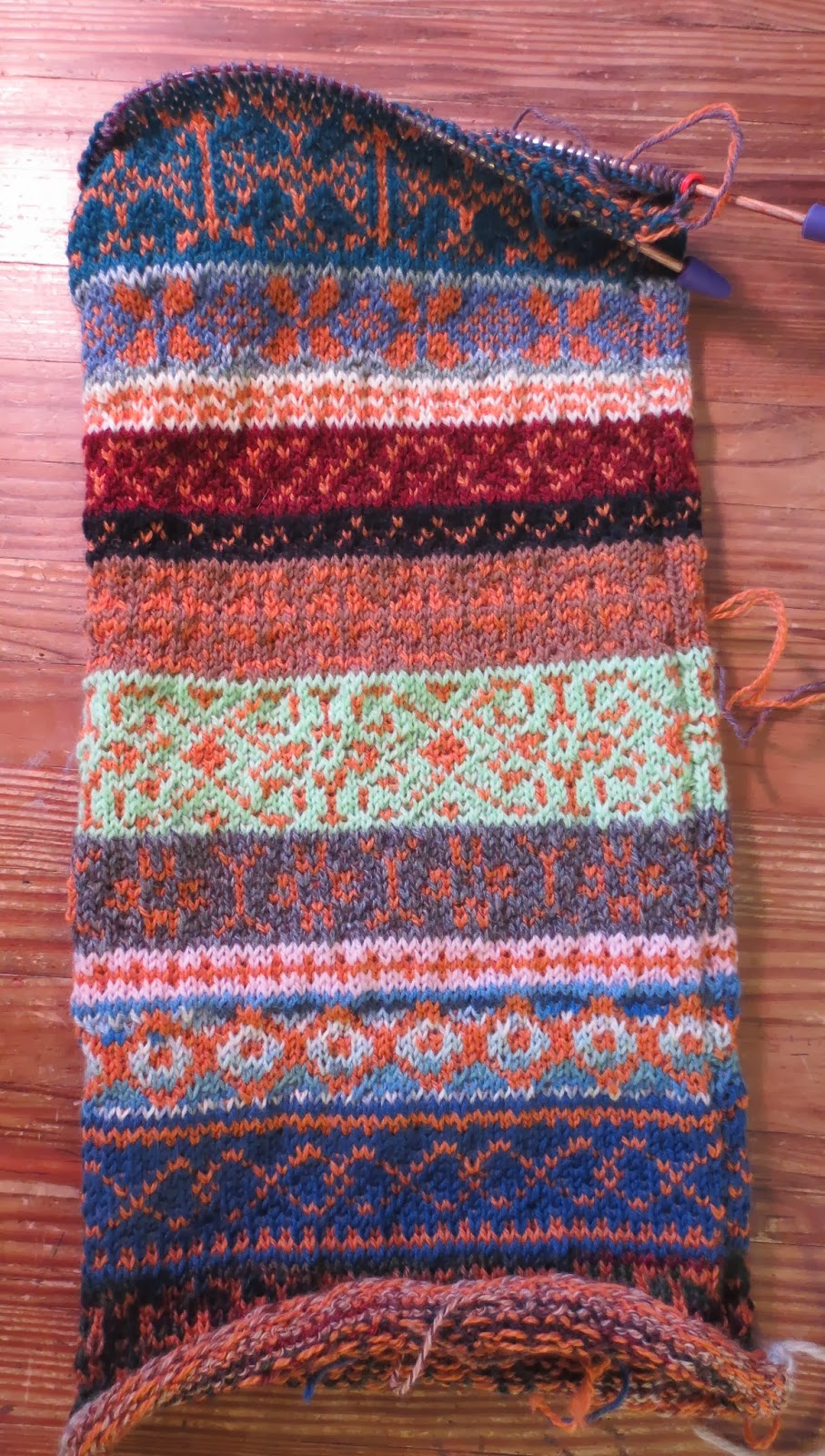 One snow storm later, I have almost a third of a scarf.  The majority of my sock yarn is dark, subdued colors & I obviously didn't have enough lighter colors to copy Wendy's exactly.  Besides, who wants to be a total copycat anyway, right?  What I did have was a lot of Sweet Potato orange Palette yarn.  The plan is, the foreground will be knit with the orange, the background will be knit with scrap sock yarn & no two backgrounds will be the same, nor will the fair isle patterns repeat.  In other words, it's going to be a wild mess.

As for our snow storm, we did not get 30 inches, but we got some.  When I went to bed Wednesday night, it looked like this, 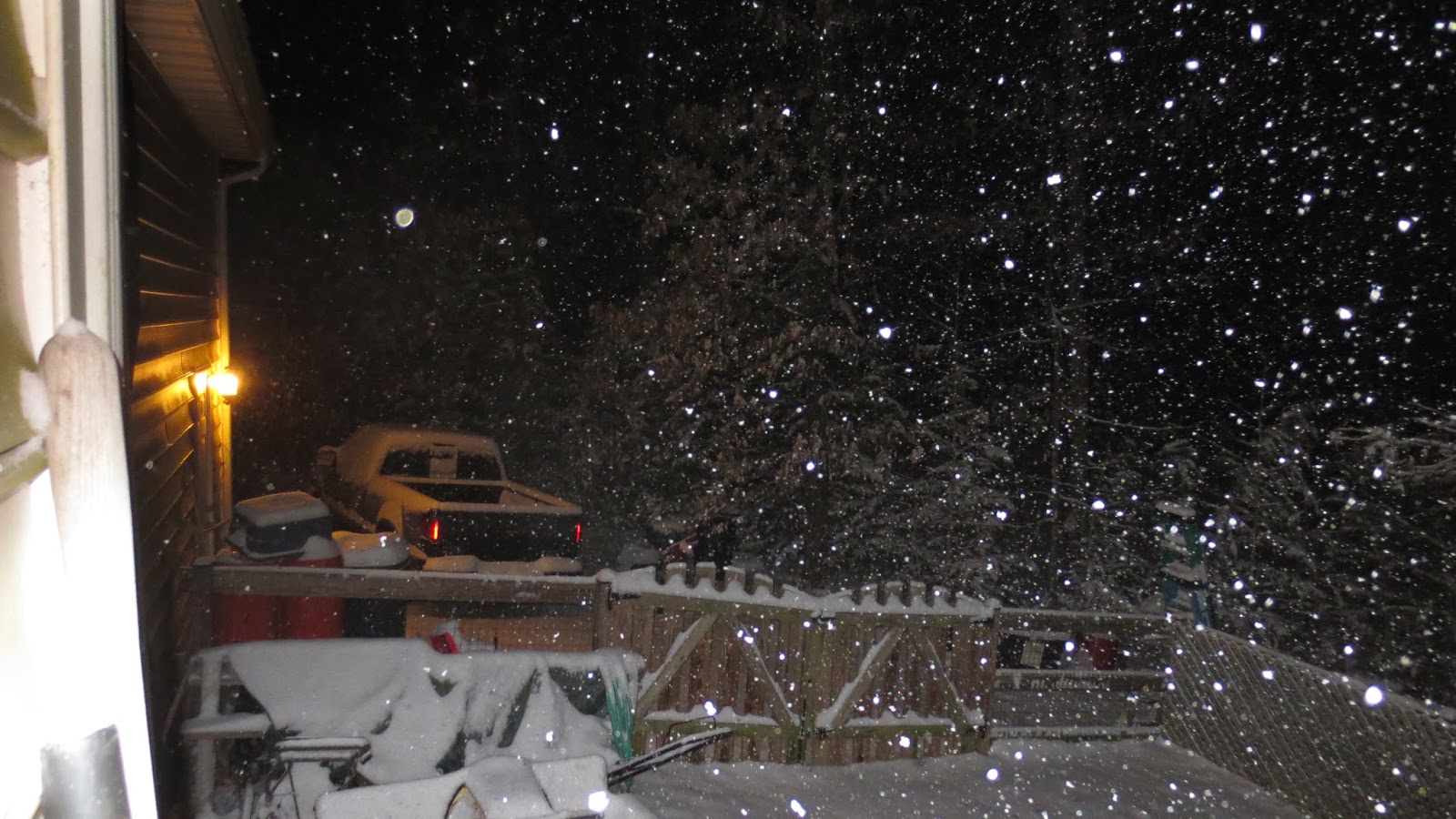 It was coming down at a rate of slightly over an inch an hour & we already had almost 7 inches.  I woke up Thursday morning to find, 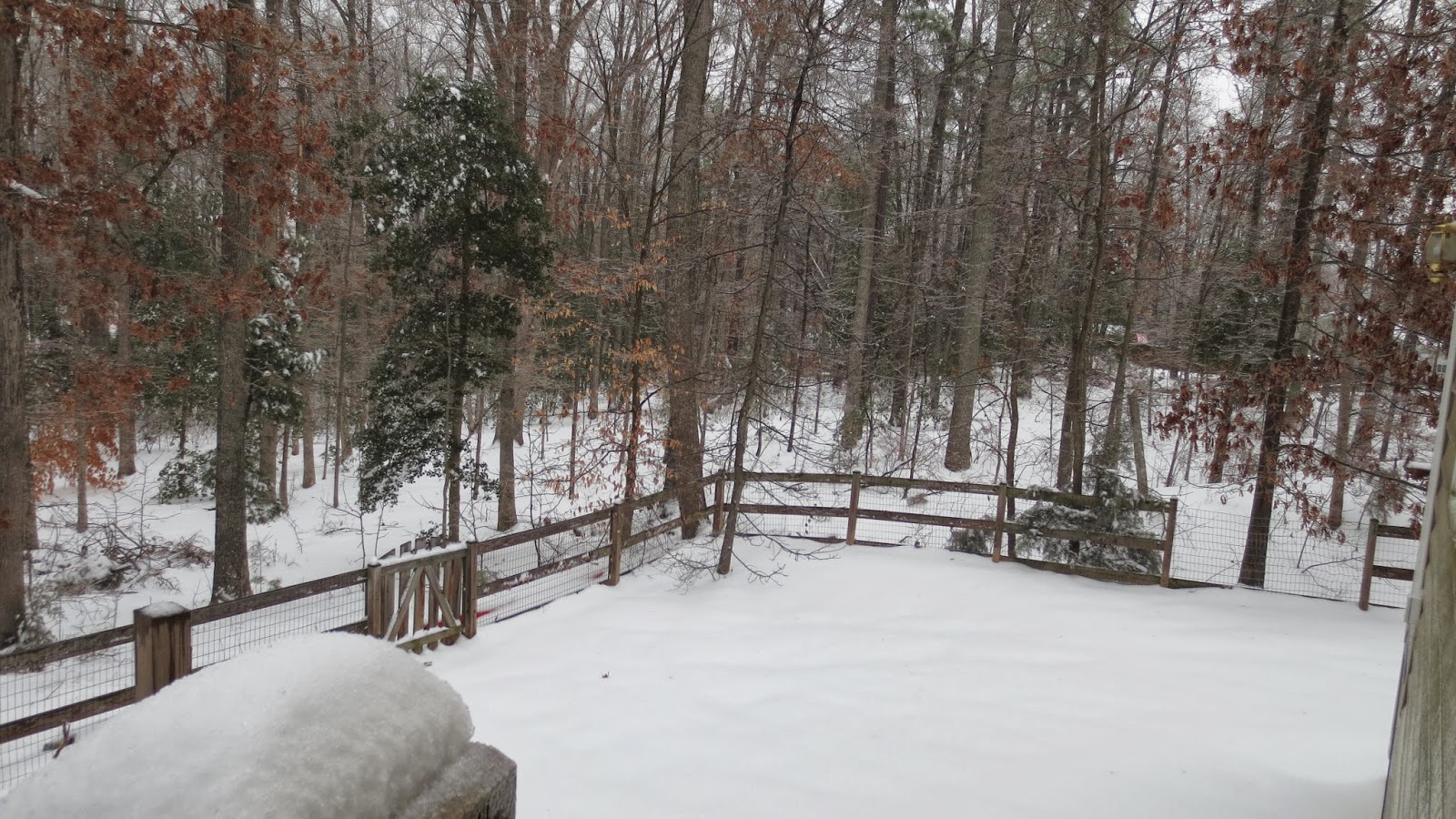 Six inches plus a thick, thick layer of ice on top.  At some point, it had turned to freezing rain which had smashed the snow down. (And no, that's not a hole in our fence, just a hole in the boards.  As is typical, less than a week after installing the fence, a tree fell on it & smashed the boards in that one area.  So now, the wire part is still there, just not the boards.) 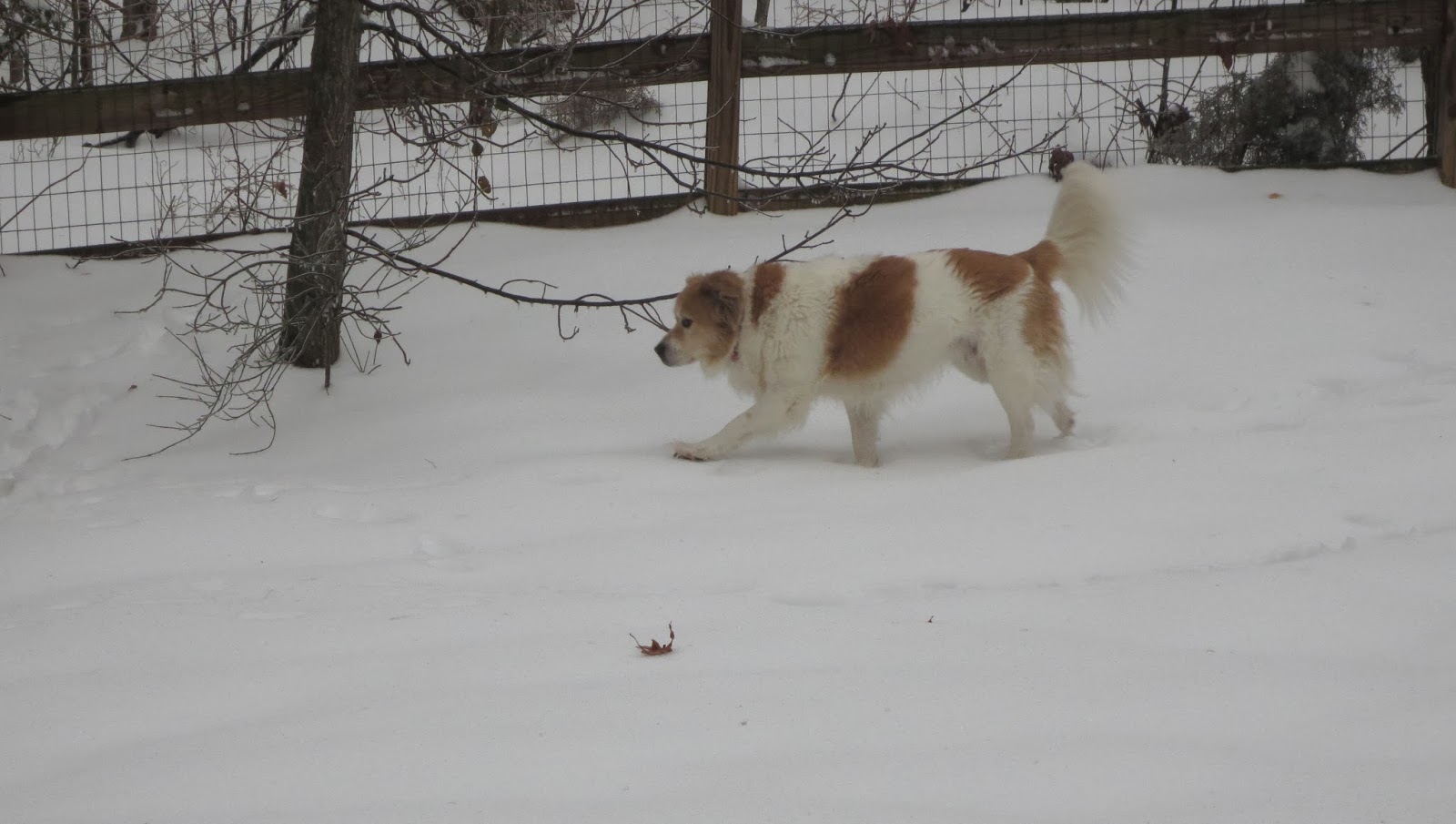 The dogs were NOT pleased with the conditions.  They love to play in snow but they definitely did not like breaking through the ice with each step they took.  They ventured out, reluctantly, did their business & came straight back in.

As snow storms go, it was a crazy one!  It started out on Wednesday afternoon snowing hard, changed to freezing rain in the wee early morning hours, then it freezing drizzled most of the day on Thursday.  In the late afternoon, it began to thunder, then it hailed.  Hailed!!  Dime sized hail in the middle of a snow storm!  Then it returned to snow, a few hours later it thundered some more and continued to snow, then at the tail end of the storm, it turned back into freezing rain for an hour or so.  And as is typical in Virginia, on Friday, I'm riding down the interstate (thank you, VDOT, for doing such an excellent plowing job!) with the window almost half way open because the sun was making the inside of the car uncomfortably warm.