I'm on a stripes kick.  It wasn't a conscious decision but the last seven or eight things I've knit have been striped.  I finished the blue & gray striped socks last week but never blogged about them because I wanted to sew up the toes before showing them off.  Apparently the urge to post them is stronger than the urge to Kitchner them because here they are, still hanging out with open toes: 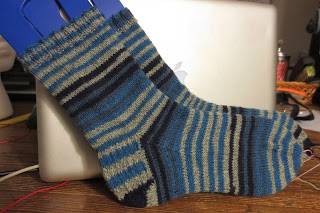 One of these days, I'll find myself in a quiet, well lit corner with my handy-dandy Kitchner cheat-sheet & I'll sew them up.  I hope that day comes soon.  I've recently worn holes in three pairs of my socks.  It's been a sad few weeks!  But hey - those socks have been worn routinely for over 10 years.  Wow!  Ten years.  That's amazing!  And I'm sitting here thinking that that can't possibly be right, except that I distinctly remember wearing two of them in our old house & it's actually been almost 12 years since we lived there.  Wow.  Just wow! 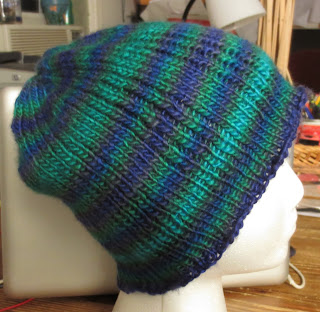 And then there's this striped hat.  It may last 10 or more years as well.  It's knit from Red Heart!  Shhhh, don't tell.  (Yes, I am a yarn snob!)  The yarn is actually Red Heart's Boutique Unforgettable.  I have no idea how it came to live in my house but I'm glad that it did.  Although it's a Red Heart acrylic yarn, it's just as soft as it can be and I absolutely love the color.  The photo doesn't do it justice, mainly because it was taken at night in horrible lighting on my very messy desk.  But in real life, it's emerald green with stripes of purple that vary from almost black to grape.  Besides the softness & the color, I also like the way the hat's appearance changes based on the size of the head (think man vs. woman.)  On a smaller head, the hat is a bit slouchy and has just a hint of a ruffled shape around the face.  On a larger head, the ruffle smoothes out and looks like any other ribbed hat.   Anyway, I liked the hat so much, I'm knitting a matching cowl.  No photos of the cowl as I've only got a few inches of knitting done so far.

So, on a totally different note, how's the weather been treating you?  Here in Virginia, it's been typical.  Not typical as in normal temperatures, but typical as in you never have a clue what to wear and you need to have both your harshest winter clothes as well as your summer clothes available.   Our "average" winter temperatures are are the mid 40's during the day & the upper 20's at night.  Recently, when the big cold wave hit us, the daytime temperature dropped 41 degrees in a matter of hours to give us a balmy high of 6 degrees one day.  We tied a record for cold temps that day.  Three days later, we broke another record.  This one for high temperatures when we hit 68 degrees.  It's no wonder practically everyone in the state is sick & we have a reputation for dressing funny.  The extreme temperature swing brought massive, massive rains and house shaking thunder storms.  It also produced heavy fog to go along with the flooded roads.  Here's a picture of our lake.

You can see the fog rolling across it.  The picture was taken around 3:30 in the afternoon & I don't think I've ever seen fog like that in the middle of the day before.  Being a Stephen King fan, it freaked me out just a teeny tiny bit.

So, what's your weather doing?  Feel free to rant or brag about it in the comments.  Meanwhile, I'm off to knit a few more inches of cowl before bedtime.
Posted by Jeannie Gray Knits at 10:52 PM