Fire in the Sky

Last night my daughter & I went driving around looking at Christmas lights.  At one point, we were driving down a dark road & we could see a weird orange glow off in the distance.  We had the conversation about how we hoped someone's house wasn't on fire & kept driving.  A few miles later we entered a neighborhood and what did we find? 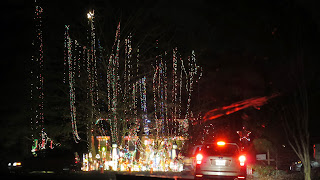 It wasn't a fire making the sky glow.  It was a Tacky Lights tour house.  It was impossible to get a good picture because there was a line of cars waiting to see the house & when you made it to the front of the line, you were too close to get a picture of the whole thing.  Here's another picture, very blurred because we were rolling but I like the way the lights squiggle in it. 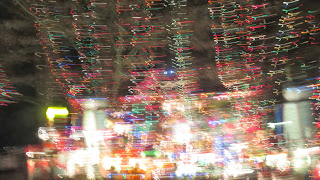 We made our way across town & entered Windsor Farms which is an old money, extremely well to do neighborhood in Richmond.  Big mistake!  Those old money folks don't waste any of it on street lights or road signs.  We got so lost!  The neighborhood is not laid out in straight, rectangular blocks like most city neighborhoods.  The roads twist & turn and vee off of each other.  And did I mention there was a distinct lack of street lights & road signs?  Anyway, we drove around in there trying to find our way out for almost 30 minutes.  We finally ended up depending on the car's compass & just kept trying to go in one direction.

We finally found our way out of Windsor Farms & headed down to the James Center. 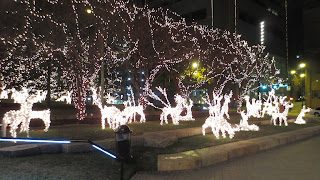 Being a Monday night, we were able to find a parking space so we stopped, got out of the car & walked around in the lights. 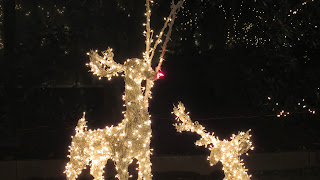 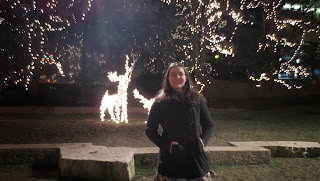 And a shot of Sarah standing in front of Rudolph.  And yes, the photo is cropped strangely.  I swear, the pile of trash by her feet that I cropped out was not there when we were taking the picture.

After the James Center tour, we warmed up with a stop for ice cream because any Richmonder knows, there's nothing like the cold wind that blows up downtown Cary Street.  In comparison, even ice cream felt warm.

As for knitting news, don't ask & I won't start screaming.

Posted by Jeannie Gray Knits at 11:14 AM