I'm starting to grow gills.  June 1st marked the beginning of Hurricane Season & while we haven't had an actual hurricane yet, we certainly have had a lot of wet.  Tropical Storm Andrea arrived the first week of June & brought flooding rains.  I'm not sure how much rain we actually got, but they'd been predicting 6 inches.  Here's a photo of the Rappahannock River.  Every other day since, we've had massive thunderstorms which have each dumped 1 - 3 more inches of rain on us. This afternoon's storm is supposed to be the wildest so far as far as wind & tornados & may give us another 3 inches of rain.  In other words, I'm growing gills!

So, my new "real" job where some other company that I have no ownership rights to pays me is kicking my butt.  Rather literally.  I am so beaten up!  I fear I'll loose a fingernail from where I dropped a bag of rolled coin on my hand, that same hand has multiple cuts & scrapes, my forearm is bruised, both of my calves are bruised and I have a scrape/cut on my ankle.  And let's don't forget the first day's shin splints.  (Luckily they went away after only a few days.)  Who knew counting money could be so dangerous!  The job is a lot more physical than I'd ever have thought possible.  The actual counting of the money, not so much, but gathering & storing the money takes muscle.  But, injured or not, I still love the job.  So much so that I sort of feel like a Stepford employee.  The people are fantastic, they don't mind my constant questions (not yet, at least,) they are friendly & kind to the clueless newbies & everyone in my area seems to get a long well.  We also have a nice bathroom (which can be dang important!) with THE absolute coolest toilet paper dispenser.  So, yeah.  My life is so pathetic these days, I'm excited about a toilet paper dispenser.  But this thing is awesome!  It doesn't appear to be all that freakishly large, but it holds about 8 rolls & when one roll runs out, you just spin the dial & a new roll is ready & waiting.  I so want one for our house.  They can keep their money - they'll never have to worry about me stealing the cash, but if I can figure out a way of smuggling that toilet paper dispenser out of there, I'm taking it!

The only problem with the job is that it's severely cutting into my knitting time.  In the two weeks I've been working there, I've only knit one shawl. 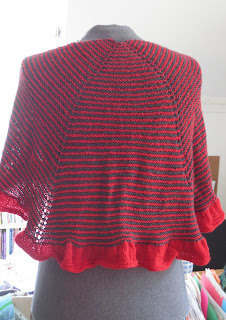 And it's not even that large of a shawl nor did I use a tricky lace pattern that took forever to knit.  It's just simple garter stripes of gray & red with a solid red stockinette ruffle.  I like it though.  The red is bright & cheerful but the gray tones it down so it doesn't look like a stoplight & the ruffle girlies up the gray & red stripes just a bit.  It's another one of those shawls that I was planning to put in the shop but I may end up keeping for myself. 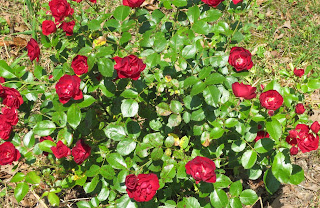 My sad attempt at rose gardening.  I'm not sure you can call it "gardening" though.  Several years ago, my husband's buddy dropped by with a pickup truck full of plants he'd been hired to remove from someone's home.  He knew our "garden" consisted of not much more than crabgrass & thought we could use them.  Anyway, most of the plants have done exceptionally well.  This poor rosebush, however, has not exactly thrived.  First, it died.  I cut the trunk of it back just about to the ground & the next year, it came back & started to grow.  It just didn't grow roses.  For the past 3 or 4 years, it's produced a few leaves & grown a little in size but hasn't produced more than one or two roses.  But this year...  Blooms galore!  Of course, if you look closely, you'll see that the leaves are covered in brown spots which I'm sure mean something dreadful will happen to it soon.  Time will tell.

Can you tell?  I consider myself a naturalist gardener.  At least that's what I like to call myself rather than someone who kills plants constantly due to my lack of effort & caring.

And with that, I'll bid you adieu as I need to go hop in the shower & get ready for work.
Posted by Jeannie Gray Knits at 11:03 AM No comments: