Hail to the Redskins!

I'm not feeling overly creative at the moment, we are having a massive thunderstorm with dime sized hail and I needed a blog title so....

Hail to the Redskins. 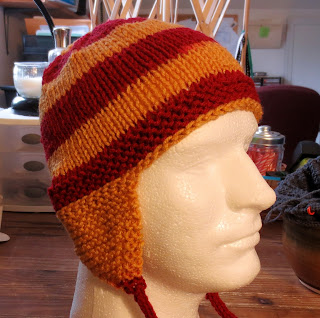 Although I freely admit to being a yarn snob, I couldn't resist Red Heart's Team Spirit in Redskin colors.  That's Mr. Freaky Face modeling the hat.  He's very happy to have ear flaps because they cover up the dent in his ear from where he recently took a tumble off the shelf.

I haven't made much progress at all on the latest chevron scarf.

I wasn't feeling the love & quickly put it down & started another blanket instead. 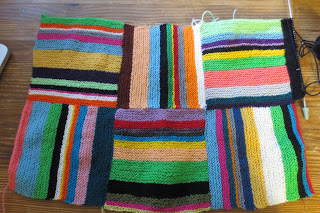 I got the idea from a rug I saw in a magazine.  I'm using Fibonacci's numbers (the Fibonacci number?? not sure how to word that) for the stripe sequence & solid color scrap yarn for the stripes.  I like it & hate it at the same time.  It's bright and gaudy and tacky but oddly, the bigger it gets, the less gaudy & tacky it seems.  Is that what they mean by "growing on me"?

While working on the blanket squares, I watched Once Upon a Time on Netflix.  I started noticing all the different hats the characters wear which got me thinking about hats and how much easier & quicker they are to knit than a blanket and... 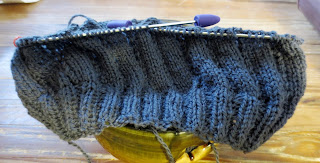 Well, the hail has finally stopped and the thunderstorm seems to have moved on.  Think I'll go see if the newly planted tomato plants survived.
Posted by Jeannie Gray Knits at 5:40 PM