I've got scarf fever!  My knitting obsession seems to have turned to scarves.  I'm choosing to ignore my list of about 80 things I'd planned to knit for the summer & instead, I'm madly knitting wool scarves.  At least I know I'll be warm come winter.

Yesterday, I finished this beauty: 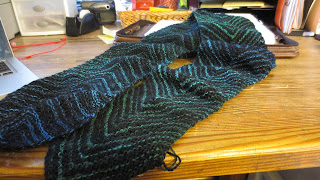 I started with a mitered square and turned it into a loooooong rectangle.  The yarns are Knit Pick's Palette and a Jawoll Magic knit on US 3 needles.  It took me several tries, but I'm happy with the outcome.  I'd started out using only the Jawoll but the scarf was eating yarn like crazy & I decided I wouldn't have enough.  I frogged that & started over using a coordinating blue Palette & the Jawoll but although the two skeins looked great sitting next to each other, the knit stripes weren't so hot.  I frogged it again & gave the black a try.  Hats off to the Jawoll for surviving two froggins!

Rather than weaving in the ends & blocking it, I promptly cast on for another scarf. 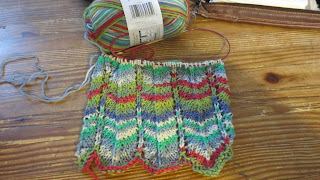 I'm not sure I like  how the stripes are falling on the chevron pattern but I'm hoping it will grow on me.   The yarn is Patons Kroy Socks which I've used many times and the needles are Knit Pick's interchangeables, size US 4.  Have I mentioned how glad I am to finally have a set of interchangeables?    I love my interchangeables!  They are like my Kindle.  I thought I was probably throwing away money when I bought both the Kindle & the interchangeables, but everyone else had one so....  Turns out, Everyone was right!  They each quickly proved their value & became prized possessions.

Well, it's a cool, rainy day here & the couch & afghan (hand knit, of course!) are calling.  I think it's definitely time for a rare afternoon nap.