So far, it's proving to be a pretty typical March in Virginia. 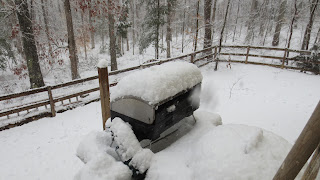 We had a snow storm followed by several days of temperatures in the mid 60's.  The snow started Tuesday night & continued through Wednesday evening.  As is typical of Virginia weather, the storm couldn't make up it's mind what it wanted to be - rain or snow.  It would snow like crazy for an hour or so & the snow would accumulate to 5 to 7 inches, then it would rain like crazy for 30 minutes  & compact/melt the snow down to just a couple of inches, then it would change back to snow & start accumulating again.  Those periods of rain sure did a number on the travelers as it turned the roads into slushy, icy disaster zones, but it sure helped keep the total snow accumulation down.  If it hadn't been for the rain, we'd still be trying to dig out.

While it snowed, I knit. It's a chevron scarf desperately in need of a good blocking.  I've also started another mitered square blanket.  I have several of them in the works, but I think I like this new one the best.  I'm not exactly happy with the square size of the other two, one's too large & one's squares are too small.  This new project is the Goldilocks of them & seems to be just right.  I've only gotten eight squares done so far so there wasn't much to photograph.

I also finally got around to blocking Sarah's scarf. 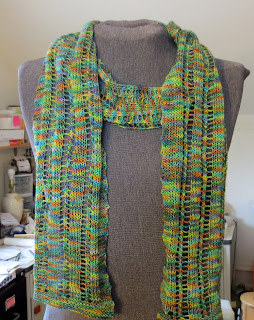 It looks much better in real life.  The light is horrible in that picture, plus the gray mannequin does nothing for the bright colors of the yarn.  Sarah seems to be happy with it and I think she'll be able to get a lot of wear out of it.  It's wool so it should be warm in the winter, but it's extremely light weight & lacy so I think she'll be able to wear it in the summer too.

For non-knitting news, I need to take a moment to say how proud I am of my son.  I've mentioned before that he bowls.  This past Saturday, he rolled an 820 set.  His coach thinks it's probably a state youth record, so that's pretty exciting!  A 900 would be three perfect games (36 strikes) in a row.  If Zack's information is correct only 17 people have rolled a 900.  Sixteen of them were adults & one is a youth with an unconfirmed score.   Also, with only three more weeks to go, his youth travel league remains in first place with quite a few points separating them from the second place team.  It's a little too early to start bragging, but ....  Go Sunsetters!

Well, I hear scrap yarn & mitered squares calling me.  And unfortunately, I think the laundry may be making some noise too.
Posted by Jeannie Gray Knits at 11:29 AM