Pop quiz....  How many times do I have to do the same load of laundry over again before I remember to take it from the washer & put it in the dryer so that I have clean, fresh smelling clothes instead of a wet, moldy lump of clothes?  They say "three's a charm" but I'm hoping that this fourth washing will be the one that makes it into the dryer.

I've once again taken a full month to write a blog post.  Good grief!  What is wrong with me?  I'd like to say it's because I've been so  busy knitting & otherwise being productive that I haven't had time, but sadly, no, it's more like I've just been lazy.  I'm blaming Netflix.  A few months ago, my daughter lay moaning on the couch from the flu & she found a free trial offer so we signed up.  I know, everyone else in the free world has already tired of Netflix & moved on, but our family tends to run about 15 years behind everyone else, technologically speaking.  Anyway....  I fell in love!  I can sit at my desk & pretend I'm working when in fact I'm obsessively watching eight seasons of various TV shows.  It's fantastic!

Luckily, I can knit & watch TV at the same time.  Granted, I've been spending so much time choosing the next show to watch that I haven't gotten that much knitting done, but.... 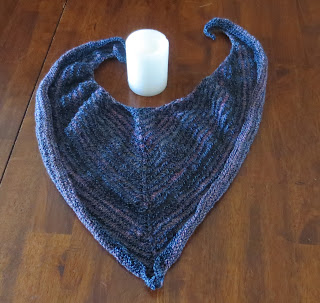 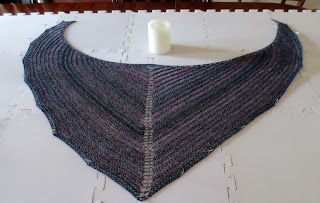 After blocking.   Actually, during blocking. The candle is in the photo simply as a reference as to how much the shawl grew during the blocking process.  It's knit with two skeins of Patons Kroy Sock's yarn, one in blues & one in pinks.  I'm not normally a lover of pink, but I love the way these yarns blended with each other.  I also really like Patons Kroy Sock's yarn.  It's inexpensive, it knits up well, it feels good in my hands, and it seems to hold up well.  I've only knit one pair of socks with it, mostly I use it for shawls, but the one pair have held up in the wash just fine for over a year.  I'd planned to put this shawl in my Etsy shop but during blocking, I noticed an extra yarn over along the center column.  Items with obvious errors don't make it into the shop.  Too bad, looks like I get to keep this gorgeous shawl!

During the past month, I also knit this shawlette: 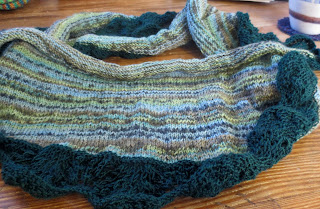 Not an overly attractive name, but the blurr of greens, blues & browns screams pond water.  The "pond water" yarn is Opal's Vincent Van Gogh and the solid green is Froclicking Feet.  I love the way the it turned out and can't wait for it to be blocked.

Apparently, I can wait.  It's been finished for several days & I haven't tossed into the bathwater yet.  It's been cold & cloudy & our house is freezing.  No matter how much I like the shawlette & want to see the finished product, I can't bring myself to hand wash anything in cold water at the moment.  Can you say, wuss?  It is supposed to warm up later in the week....

The other day, I discovered a new local yarn shop.  Actually, it's not all that new, just new to me.  The shop has been open a while now, but it's in a part of town I don't get to often.  After visiting the shop, I think I'll be driving to that area much more frequently from now on!  Anyway... my daughter talked me into knitting a scarf for her. 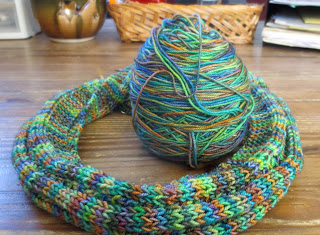 The yarn is from Araucania Yarns.  I'd like to tell you more about it but I can't read the tag.  The yarn itself is fantastic, but the label...  The label is horrible.  It's gold ink printed on brown paper and the print is microscopic.  Even if the gold ink didn't blend into the brown paper & become invisible, I still wouldn't be able to read it because the print is so small.  The yarn shop tells me it says that it's 450 yards of hand painted merino.  What ever it is, it's lovely to work with.  The finished scarf will require some serious blocking though.  I'm using a fishbone lace pattern but unblocked, it looks more like ribbing.

Another thing that's kept me busy... 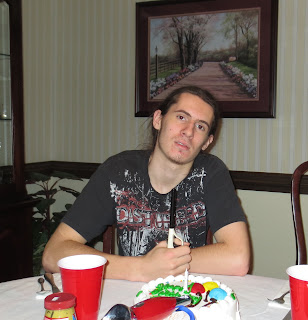 My baby boy turned 18 yesterday.  Apparently entering adulthood didn't affect his fondness for having his picture taken.  Or maybe he's mad because he had to light his own, single birthday cake candle.   He's also wearing the exact same shirt he's worn for the last two birthdays. Wonder if that means I need to take him shopping or if he's just a loyal Disturbed fan.  Anyway, happy birthday, Zack!

Posted by Jeannie Gray Knits at 10:15 AM