I thought my baby boy turning 18 was bad enough but today he received his invitation from the Selective Service to take a seat on the Group W bench.  I have all the respect in the world for our military, but boy, am I glad there's no more draft.  Zack does not handle being bossed well without a clear & detailed understanding of why he's being told to do something.  He also does not have a single follwer bone in his body.  Zack would never survive the military lifestyle.

In knitting news, not much has changed. 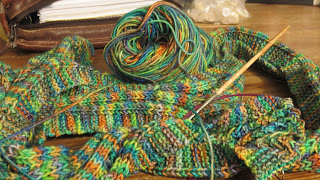 Instead of knitting, I've been rearranging furniture, purging & filing.   For several years, I've been using a desk made from a bathroom sink base & topped with el-cheapo kitchen counter laminate.  And for years, I've been hating that desk & swearing I was going to toss it out the window.  I finally reached the breaking point last week.  I didn't toss it out the window, but I did move it aside.  I'm now using an old dining room table as a desk & the old desk is pulled up to the end of the table (it fits perfectly!) for extra space to pile stuff.

Because the table turned desk doesn't have drawers, I also rearranged the one zillion plastic file cabinet/drawer things I have.  I ended up tucking several of those plastic drawer things under the table & so far, it's working great.  One of the plastic drawer things is on wheels so I can pull it out & use its top to set stuff on as well.  I've also rearranged the entire desk area so that my back is to the wall instead of to the room.  In the process of moving everything around, I decided to purge quite a bit of crafting paraphernalia that I have either never used or haven't used in years.  Much of that you'll be seeing over the next few weeks in my shop.

All in all, I'm loving the new desk arrangement.  I find I'm much more motivated to get to work in the mornings.  The only problem is, once my mind starts to wander, there's a whole lot more to look at now.  Instead of staring at the wall with one motivational quote on it, I can see the whole rest of the room.  And there's a LOT of stuff in this room.  It's a large room & serves many purposes.  My husband's office is on the other side, all of our homeschooling stuff is in here, the drum set lives in here (because it's so much fun to do office stuff while a teenager bangs away on the drums) and the room also serves as our "family" room with the TV & thousands of gaming systems.  I'm thinking I may hang curtain rods from the ceiling & "wall" myself into the corner some how.