Take this shawl for example.  It went from a lumpy mess of nothing special 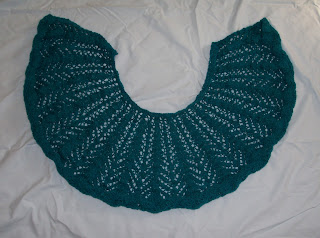 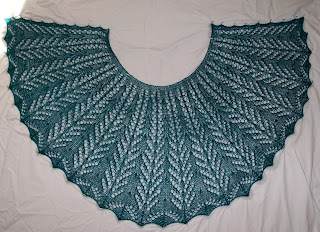 Don't you just love it?  The pattern is WendyKnits' Summer Solstice KAL.  Seeing as though the KAL started in June and I'm just getting around to finishing it, I don't think I have to worry about issuing a spoiler alert.   I used KnitPicks Palette yarn in the Calypso Heather colorway and a #5 needle.  Once again, I have to say how much I love WendyKnits' patterns.  I'm not sure how many of her patterns I've knit, but I know I've knit more of hers than any other designer and I've never found an error.  And on those occasions when I've suffered an Alzheimer moment and couldn't figure something out, I emailed her & she responded right away.  Wendy's patterns also just seem to make more sense to me.  I have no idea why that is.  They are all written in the same basic knitter's language and use the same basic chart symbols, but for some reason, Wendy's patterns just work better for me.

Meanwhile, while I anxiously await 1 p.m. and the start of the Redskins season.  The pork is on the smoker, the baked beans are in the oven and I'm busy knitting pink things to list in my Etsy shop in honor of breast cancer awareness next month.

Posted by Jeannie Gray Knits at 11:35 AM