Bacitracin - it's better than Neo or Polysporin.  At least I think it is. 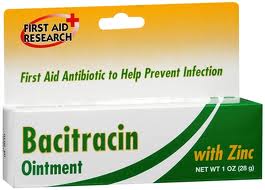 I first discovered Bacitracin last year when I had to have a little out-patient surgery.  The doctor told me not to use Neo or Polysporin on the incision site because many people are actually allergic to their ingredients & any reaction would slow the healing process.  Instead, I was instructed to use Bacitracin.  When I stopped at the drug store to buy it, I was pleasantly surprised that it cost less than half as much as the Neosporin.  It was even cheaper than the store-brand!  I used the Bacitracin as instructed and the incision healed quickly and barely left a scar.

Several months ago, I had a bad Rosacea flare-up.  The prescribed $158.00 topical ointment did absolutely nothing for it.  On a whim, I smeared a little Bacitracin on the affected area and within five or six hours, there was a visible difference.  I used a little more and my face cleared right up.  Since then, I've used Bacitracin on every little skin imperfection and each has cleared right up, and freakishly fast.  I love this stuff!

In knitting news, I've been working on a shawl with Lang Jawoll Magic yarn.  I love the yarn, the color and it's texture, and I love the pattern, but I'm not enjoying the knitting process.  I'm not sure if the yarn is just not right for the pattern or if I'm just knitted out.  I have been doing an awful lot of knitting lately.   Still no pictures, though.  One of these days....

On a comical note, my husband just came stomping into the house cussing.  Apparently, he spent the last 30 minutes stuck in his truck.  The truck has been having some engine problems & had been parked out in the driveway.  He was pulling it into the garage to work on it but the truck cut off as he was pulling in.  Apparently, it rolled to a stop just as he was pulling through the garage doors.  And because the truck has an oversized cab, it's wide.  There's only a 4 or 5 inch clearance on each side between the truck and the garage door.  Anyway, he couldn't open the truck door, he couldn't climb out the window because the door frame was right in the middle of the window, and he didn't have his phone in the truck with him.  Why he didn't start blowing the horn or something to get our attention, I don't know, but he didn't think to do that.  Instead, he sat in the truck cussing until one of the neighbors came over to see about borrowing something.  A little push and the truck moved enough to clear the doorway and he was able to get out.  Anyway, I thought it was kind of funny.  Specially since he didn't have enough sense to blow the horn.  Which is weird, actually.  He's normally very resourceful at problem solving.  Maybe his favorite talk radio show was on.