I used to use a different version of Garnier Fructis shampoo & conditioner and liked it okay.  And although I liked it & my hair dresser recommended the brand, I switched to something else because they didn't sell it at my warehouse club and/or I had a coupon for something else.  Plus, I'll admit - I get bored with the same product over & over again.

As I've mentioned before, I have the world's worst hair!  It's thick.  REALLY, REALLY thick.  As in, so thick that new hair dressers always call all the other hair dressers over to examine how thick it is.  On top of it being weirdly thick, the underside in the back grows in ringlets, while the sides are wavy and the front & outer layer of the back grows perfectly straight.  Oh, and it all grows towards my face.  I'm like a female version of  Cousin Itt. 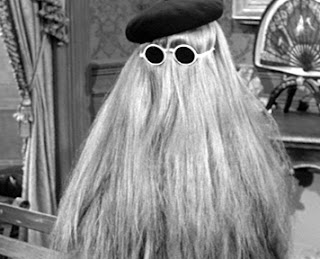 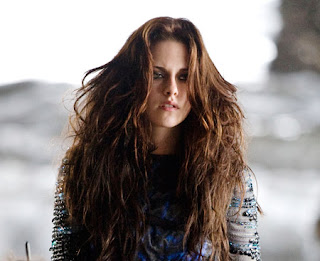 Actually, it looked just like that.  Thick, frizzy, uncombed, and hanging in my face.  (Sorry, Bella, but that's really not a good look.)

Because of the curls & waves, my hair tends to be dry, except right at the scalp where it tends to be so oily, I could set up my own oil rig.  A friend lent me the book, Curly Girl, and I followed it's directions for quite a while.  The main direction was to not use shampoo.  Use conditioner, but no shampoo.  It worked fantastically, except every six weeks or so, I'd wake up and my scalp would feel funky and I'd need to shampoo.  Eventually, I ran out of what ever shampoo I'd been using and went to the store to get some more.  For some reason, the Garnier Fructis Triple Nutrition jumped out at me and I bought it.  And instantly fell in love!  My hair is never, ever greasy.  Even when I was sick a few weeks ago and didn't bathe for more days than I care to admit, my hair never got greasy.  What my hair is, is soft and way less frizzy and much more manageable.  Instead of each individual hair going it's own separate frizzy way, the hair on the sides of my head form nice beachy waves.   Beachy waves like this:

So granted, it still looks strange that the sides have beach waves and the back is in ringlets, but it's still WAY better than frizzy Cousin Itt hair.  And have I mentioned how much softer my hair feels?  I really do love this stuff! 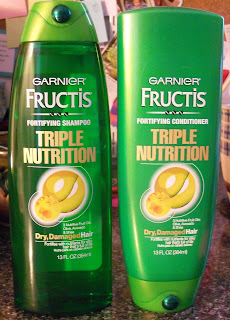 As for knitting news, I finally wove all the little ends into the baby blanket this morning while I was waiting for a particularly slow email video to load but I still haven't taken any pictures.  Instead, I've been busy working on another mitered square project. 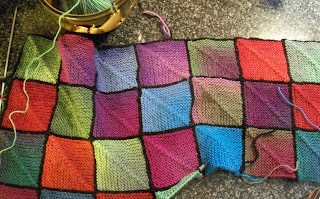 It's going to be a table runner or dresser scarf, depending on how the yarn holds out.  I'm hoping for a table runner.  I absolutely love the colors, except they are not showing up well here.  At least not on my screen, which is weird because the same photo viewed from my desktop looks fantastic, but loaded to the blog, it's washed out and rather icky.  Weird.  But anyway, I love it!  The color saturation in the yarn is fabulous and the yarn itself is Heaven to knit with.  I believe that if I could only knit with one yarn for the rest of my life, Mini Mochi would be it!

Okay, I'm going to end this post with a shout out to Snow White & the Huntsman.  My daughter and I went to see it a few days ago and I really enjoyed it.  I have to say though, the Huntsman turned a good movie into a GREAT movie! 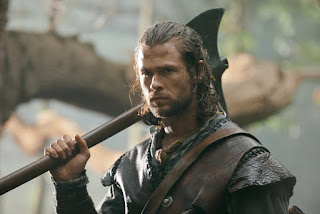