You've heard of Freaky Friday & now I have Marvelous Mondays going on.  Today must have been Twisted Tuesday.  It was definitely one of "those" days.

It started out around 1:00 a.m. when I finished one project and immediately and excitedly cast on another.  Around 3:00 a.m., I started thinking that I really should go to bed, right after this row.  Finally around 4:00 a.m. I was having to tink more than I knit.  It was obviously time to tear myself away from the needles.  Specially since I had to get up early.  The Higher Powers must have liked what I was knitting because I woke up a little over an hour earlier than I needed to.  I had time to get a few more rows done!  I knit a while then got dressed in record time & had a few more minutes to knit another row.   Things were going too well though.  As I was opening the door to leave for my appointment, Hubby calls.  Crud.  I now have to drop everything on my schedule & take care of some things for him.  It only took about 15 minutes, but still.  It frustrates the daylights out of me when he does that.  Plus now I have to drive 120 mph to make up for those 15 minutes.

So I'm riding down the road, doing just under speed limit instead of 120 mph because the county is in the process of mowing along the edge of the road & their mowers are taking up part of the lane.  I crested a hill and Bam!  There in the middle of the road is a twisting, twining, writhing pile of snakes.  Eeeww!!!!  The mowers must have disturbed a nest.  A giant nest.  No, a Ginormous nest!  It was the craziest thing I've ever seen.  It was like a big giant tumble weed of snakes moving across the road.  Of course, I plowed right over top of them.  Eeeww!  And because I have an inbred fear of snakes, I'm sure 15 or 20 of them climbed up my exhaust pipe and proceeded to make their way into my car.  For that matter, a few of them probably crawled up on to my bumper & up to the roof.  I bet if I go check the car out, there'll be at least 5 or 6 of them twisted around my luggage rack just waiting to pounce on me.

I finally made it to town & ran into Target to buy a birthday gift & some Sudafed for my son.  I grab the intended birthday gift & head to the pharmacy area.  Instead of finding boxes of Sudafed on the shelf, there's a sign saying to see the pharmacist.  I see the pharmacist, he grabs a box of Sudafed off his shelf & asks for my drivers license.  He scans my drivers license into their computer & the computer tells him he is not allowed to sell me Sudafed.  What??  We move to another cash register and try again.  Same results.  He manually types in my info.  Same results.  Target won't sell me Sudafed.  You have to be freaking kidding me!

I finally get to the restaurant where I'm meeting a friend to celebrate our birthdays.  Of course, after dealing with Hubby, the snakes & the Sudafed fiasco, I'm a few minutes late, but she's a good friend and forgives me.  We had an excellent lunch while discussing our old age.  (She turned 60 just a few days after I turned 50.)

After lunch, I head downtown to drop off some keys for my husband's business.  And as fate would have it on a Twisted Tuesday and since I'm stopping at traffic lights every 15 seconds, the a/c in the car dies and decides to blow heat instead of cool air.  Nice.  After missing 3 turns, I finally arrive at the address.  I'm thinking I'm going to a small bank branch, but nope.  I've arrived at a 12 story office building that takes up a full city block.  This should be interesting because all I know is that I'm supposed to give the keys to a guy named Walt and no one else.  Finding Walt proved to be MUCH easier than expected and after only about five minutes, I was back in the sweat box I call a car and was headed to the yarn shop.

Ahhh..... the yarn shop.  Bliss!  I got it confirmed that I was either going to have to un-do the bind off or simply fudge the dropped stitch in my recently finished striped shawlette.  And believe me, I will be fudging, not undoing the bindoff!   Next, I got some help  picking out a ruffle color for a baby blanket.  The blanket was knit a while back and I was waiting to find out the baby's sex before I decided what color ruffle to knit.  It's a girl!!  Next, it was time for plain & simple retail therapy.  The snakes, Sudafed & lack of a/c problems had driven me over the edge and the only way back was to fill a basket with yarn. 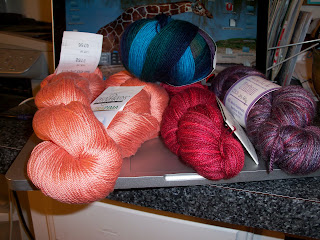 I ended up with a couple of skeins of Cascade Ultra Pima cotton for the blanket ruffle and one skein each of Lang Jawoll Magic Degrade, Pagewood Farm Yukon in the prettiest, muted purples you've ever seen although it's looking sort of brown in the photo, and Manos Lace in shades of red.

Next on the schedule was a quick stop at Walmart for coffee & bread.  And maybe they'd sell me some Sudafed.  Yay Walmart!  (Boy, I don't say that very often!)  Walmart sold me the Sudafed with no problems.  While I was walking through the grocery area, I crossed paths with a family in the midst of an earwig ordeal.  The mom had just been bitten by one & was fussing about how bad it hurt while one child chased the bug around on the floor & stomped on it while another child mentioned she'd been bitten by one the other day.  A few aisles later, I run into this same family again and they are once again stomping an earwig that has just bitten another family member.  All I could think of was, what kind of living conditions do these people have that they are bringing this many earwigs with them to Walmart?  Eeeww!

Eventually I arrived back home to find that the kids had covered every inch of kitchen counter with dirty dishes & I couldn't set the groceries down.  Argh!  It was at that point that I deemed the day Twisted Tuesday & vowed to sit my butt down and do nothing but knit until bedtime.

I hope your Tuesday was calmer.  I also hope it included yarn.

Posted by Jeannie Gray Knits at 12:18 AM