The South will rise again!

The South will rise again!  Or did rise, actually.  I hope.  Remember the Civil War era shawl I was knitting for a friend back in the fall of 2011?  I don't think I ever showed pictures of it because it was an epic failure.  The Civil War era knitting terminology was slightly different from todays wording and I had no idea what I was actually supposed to be creating.  I only had the black & white picture taken from a Civil War era magazine or newspaper to go buy.  I thought it was supposed to cover your upper back & the front pieces crossed the chest & tucked into the woman's apron.  Shows how much I know about historical fashion.  It was supposed to cross the chest & wrap around to the back and tie.  Not to mention as written, the large would barely fit a Barbie doll much less someone of today's stature.  Anyway, the whole thing was a disaster and I've been feeling bad about it ever since.

I recently came across another pattern which was written slightly better, or at least in more understandable terms, and knowing a little bit more about what the final project was supposed to look like, I decided to try again.  This time, it worked.  I think. 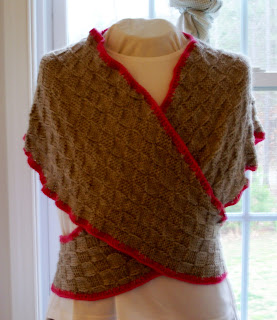 Ok, so it's not knit with the requested colors, but from what I've seen, brown & pink was a fairly common color combination back then.  This one also had a bit of pattern in the knitting which made it much more enjoyable than the first attempt's simple garter stitch. 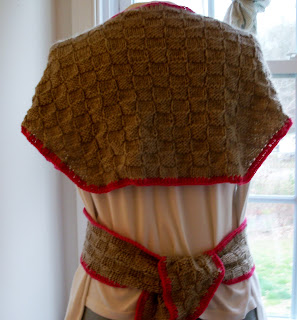 See how this one reaches around & ties in back?  Yay!  Although I'd think a button would be more comfortable.

I shipped this baby off to my friend late last week & she should be receiving it today or tomorrow.  Can't wait to hear if it looks anything like what it's supposed to.   I almost hope it doesn't because it was sort of fun to knit.  I wouldn't mind trying this one again.