Shame on me!  I can not believe how long it's been since I've shown the blog any love at all.  I've been pretty busy doing a variety of things, many of which were blog worthy, but I never seemed to be able to find the time &/or energy to write the posts.  I haven't even had the time to read other peoples' blog posts!

In knitting news,since I last posted I've knit three scarves and knit & frogged one skein of yarn over & over & over again.  That skein simply refuses to tell me what it wants to be.  I thought it wanted to be a Hitchhiker scarf but it said, "NO!" about half way through.  We both thought it might want to be a scarf of my own design which was a looooong thin triangle like the Hitchhiker but with ruffles, but once again, the yarn decided against that.  I tried making it into a shawl, two different shawls actually, but the yarn wasn't pleased with either of those choices either.  Finally, I spoke sternly to it & put the yarn in a time-out where it still sits.

Next, I knit a couple of dish clothes, but I was so disgusted by the other yarn's behavior I decided not to knit at all.

Instead of knitting, I'm making felt Christmas tree ornaments.  Because you know, everyone wants Christmas ornaments in March.  I'm telling myself I'm preparing for Etsy's  Christmas in July hoop-la.  Besides, the ornaments could be used for other things because honestly, there's nothing particularly Christmassy about them.  They are just round felt things.  They could hang around the neck of a wine bottle or over a drawer pull, or hang off a zipper pull, or a keychain or even a dog's collar.  So yeah, I'm not totally wasting my time making Christmas ornaments in March.

On the non-crafty side of life, we went to the zoo with a group of homeschoolers.  I LOVE, LOVE, LOVE this zoo.  The animals are so much closer to the public than at any other zoo I've ever been to and, best of all, you can feed & pet the giraffes. 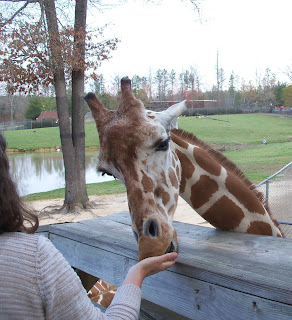 I won't take the time to load all the photos here, but if you're interested, you can go check out my Facebook page.  Most of them can be found there.   And if you are ever having a bad day or just feel the need for some stranger love, head to the Metro Richmond Zoo.  Those giraffes are just the coolest and will cheer you up in an instant.  Watch out for the big one though.  He's a bit of a bully and a food hog.

Another activity I'd like to mention is that after a year of sitting on the couch whining about how I miss running, I've finally started running again.  Well, running is not exactly correct.  It's more like I'm back to my original slow stumble.  But one day soon, I'll be running.  I've only been out for a few runs so far, but I'm rather impressed with my progress.  Seems like I'm progressing much quicker than I did when I first started out a few years ago.  My first trip out, I only traveled about 1.5 miles & "ran" in 20 second increments.  My legs were definitely feeling the recent inactivity and tired quickly.  The next day, okay, the next two days, I could barely walk.  The second trip out was 4 miles with 1 minute spurts of running and my legs didn't start to feel tired until the third mile.  That time, it was my breathing and the knowledge that I needed to be able to walk the next day that limited the time spent actually running.  Since then, each time out has been a little easier & my legs have felt tired the next day, but not sore.  Yay!

Sarah dragged me off to see Hunger Games the other day and I have to say, I'm so glad she did.  I thoroughly enjoyed the movie.  I'd loved the book, but I could only imagine what Hollywood would do with all the violence.  I was not looking forward to watching a bunch of kids viciously kill each other.  I was amazed at how well it was handled though.  The violence was sort of blurred & the screen shots jumped around from one shot to the next so quickly that while you understood what was happening, you didn't really see it happen.  It was a very pleasant surprise!

Besides all that, I've been on a reading kick.  I read a few more books from the Black Dagger Brotherhood series,   The Happiness Project, and some other book who's title & subject matter escapes me.  Must not have been a very impressive book.  I'm also still slowly working my way through The Principles of Knitting.  I can't believe I'm reading that huge book like a novel.  What a geek!  I'm learning a lot though, so I'll keep reading.

Besides all that, there have been many, many trips to various bowling alleys (will my son ever get his drivers license??) and Hubby has kept me unusually busy running errands for him.   And now, since I finally posted here, I'm going to go celebrate with ice-cream.  Can't remember the name of it, but it has peanut butter & chocolate bunnies in it.  Yum!
Posted by Jeannie Gray Knits at 9:18 PM