That was a first!

I also finished the basket weave scarf for my daughter late last night.  When I went to bed, she was laying on the couch in her pj's wearing it.  When she came down stairs this morning, she was still wearing it.  Either it's really cold in our house or she really likes the scarf.  I'll snap a photo if she ever gets dressed.

For now, I'm off to go spend an hour or two, or three or four reading.  I fear I'm about to totally abandon my knitting for a while.  I've discovered a new book series.  Actually, it can't possibly be new since I think there are 10 books, but it's new to me.  The Black Dagger Brotherhood by J. R. Ward.  Ever heard of it?  My SIL introduced me.  I'm not normally a big vampire story fan.  Ok, I know.  I've been totally obsessed with Buffy the Vampire Slayer recently but I don't like it because of the vampires, I like it because of the romance, the action, the comedy and the sarcasm, not to mention I'm head over heels in love with Spike.  But the Black Dagger Brotherhood is good too.  I've only just started the second book so I'm not positive I'll like the entire series, but it definitely has potential.  Once again, there's plenty of action, a bit of romance, a bit of comedy/sarcasm and the sex scenes will make you sit up and say, "Oh my!"  The only problem is that the books' titles are enough to make a Harlequin Romance writer gag.  I may have to knit myself a book cover so that no one sees the embarrassing titles.  Thankfully, my library doesn't have many of the series so I'll be buying most of them - on my Kindle. 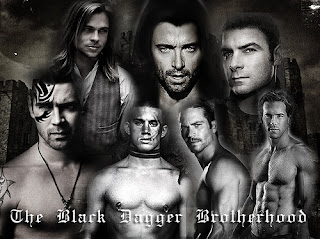 Oh, and I love the vampire's names.  There's Wrath, Rhage, Zsadist, Vishous and well, I can't remember the others, but they all have great names.  Ok, I'm off to read...
Posted by Jeannie Gray Knits at 2:10 PM