For months and months and months I've been wanting an i-cord making machine.  I saw a picture in a magazine over a year ago of a bag that had been knit from i-cord.  Yes, they'd made a zillion yards of i-cord then used the i-cord to knit the bag.  I LOVED it!  But, I don't know what it is about knitting i-cord, but I swear, I'd rather scrub toilets.  Thus, my burning desire for a machine to make it for me.   And lately, as in the last month or two, I've had many other ideas for ways to use i-cord.

I finally broke down and placed my order. 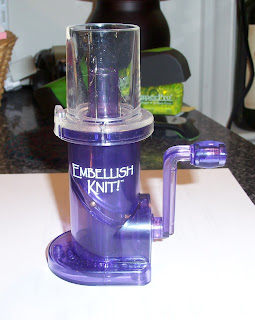 Two days later, my new toy was sitting in my mailbox.  Now I just wish I could remember why I wanted it so badly.  Yes, there was that purse, but what else did I want to make?  Why has my every waking thought for the last three weeks been about i-cord machines?  If you have any ideas, please send them my way.  I'm at a total loss as to why I wanted the damn thing so badly.

It does work though.  It took a little fiddling, but within 30 minutes of unpacking it, I was cranking out i-cord.  Luckily, I was prepared for the fiddling part of the process.  Everyone I've ever talked to that has one & every on-line review I read reported that it was fiddly to start with, but once you got going it worked like a charm.  And they were right.

Oh, and I guess I should mention - I finally finished that #%%##% beaded shawl bind-off.  It took a little over six hours to do that final bind off row.  The process was simple enough, except that I kept dropping the beading wire.  And apparently my carpet is wire colored.  That darn wire would instantly disappear the moment it jumped out of my fingers.  What I don't understand is, why I haven't found any of the wires in my socks?  There's at least six of them down there on the floor under my feet.  You'd think at least one of them would have the decency to poke me.  Maybe the wires are down there getting together with all the beads I dropped.

But hey - on a positive note, I had enough beads to finish the bind-off.  Didn't even have to crawl around on the floor looking for dropped beads.  I had plenty after all.

And it's just dawning on me that I don't have a photo of the shawl.  Maybe on Tuesday....
Posted by Jeannie Gray Knits at 3:52 PM