Wow.  I can't believe how long it's been since I've posted.  Shame on me!  In my defense, it has been a rather crazy & unusual holiday season.  It was my first Christmas on Etsy and I went a bit obsessive there.  There was the fact that my kids' "letters to Santa" were digital this year.  And late, or at least my son's was.  He didn't give me his list until the 20th & of course I was waiting for his list to order everyone else's stuff.  It was also my first year shopping completely online.  I know.  Don't laugh.  I really am behind the times, but I have to say, it was awesome!  It wouldn't have been awesome if I didn't have a list of live links to work from, but having those lists, online shopping was awesome.  Of course, since I was ordering around midnight on the 20th,  55% of the items I ordered said they would not arrive before the 24th and the other 45% were due to arrive after the 27th.  I was dreading Christmas Eve.  My normal routine is to cry & scream in the kitchen while cakes fall, dogs jump up on counters and steal platters of food while my family act not much better than the dogs.  Also, we leave around 4 p.m. to head to my sisters and don't arrive back home until late.  I was expecting Mr. UPS Man to arrive with all those gifts somewhere around 3:30 p.m., smack in the middle of the worst of the crying jag.  Oh, and have I mentioned how much I HATE to wrap presents?  The thought of having 30 minutes to complete my crying jag, rescue my contribution to two Christmas dinners from the dogs, get dressed, and wrap all the gifts was adding just a tad bit of stress to my pour addled brain.

But that wasn't the worst of it.  There were two other issues.  First, I had a pretty bad reaction to a new medication and secondly, I discovered  Buffy, the Vampire Slayer.  I'd never seen Buffy before.  I know.  Once again, I'm behind the times & have apparently been living under a rock.  I'd always thought Buffy was some stupid annoying preteen show.  But I'll be the first to admit - Buffy ROCKS!   Anyway.... let's just say I became slightly obsessed.  I watched the entire seven seasons over the course of three weeks while totally ignoring my family, my blog and many other things.  I did however get lots of knitting done.

As for the reaction to the medication, ugh!  I have Rosacea & take medication for it and apparently, the country is experiencing a national shortage of Rosacea medication.  Weird, isn't it?  Anyway, the pharmacy  was out of my usual meds so they gave me something else.  I never read the warning labels because of that power of suggestion thing.  I'll instantly think I have every symptom on the list even before I swallow the first pill.  So, I took the new drug for a  month & went in to get a refill.  Meanwhile, about five days after starting the new meds, I started having some pretty weird problems.  I kept thinking of the coincidence of the problems starting close to when I started the medication, but there were other more logical explanations too.  First, I started having "girly" problems, but hey - I'm going to be 50 on my next birthday.  Time for some girly issues to occur.  Then the muscle spasms started.  First, it was in my neck & shoulder, but I had slept funny so a neck crick wasn't that unusual.  Then I started getting weird muscle spasms all over the core of my body.  Everywhere from my ears to my hips.  It was not fun and it was a little bit scary but I kept reminding myself that I'd been spending an unusual amount of time in a chair either at the desk or knitting, then eventually Buffy watching.  I wasn't getting any exercise at all so it was no wonder my muscles were doing weird things.  Then the lung cramps started.  They really scared me & I was pretty worried about a heart attack but the cramps would alternate between lungs.  One day, the pain was on one side, the next day, the other side.  Again, I chalked it up to no exercise and the start of holiday binge eating.  And then the GURD (or is it GERD?) started.  That was fun.  Nothing like vomiting every time you lay down while having a lung cramp that is preventing you from taking a deep enough breath to even blow your nose.  Again, I chalked the GURD/GERD up to massive holiday foods, specially late at night while I obsessively watched Buffy episodes.  Finally, it was time to renew my meds & this time I read the warning label.  Muscle aches, GURD/GERD, & stomach distress.  Oh yeah.  Except I think they could have used a better word than muscle "ache".   So, I called my doctor, got a different medication, stayed off all medications for a week (while my face exploded just in time for Christmas photos of course) and all the weird symptoms finally went away.

So, leading up to Christmas, things were kind of crazy.  But, the gifts all arrived in time, in fact, the last one to arrive showed up on the 23rd in plenty of time to get wrapped.  As for the kitchen related crying jag on Christmas Eve, it never happened!  My innards were still a bit tender & I just wasn't in the mood to bake much.  Actually, the thought of eating much of anything was still a pretty icky thought.  Hubby was a bit disappointed not to have rum balls but otherwise, he was actually happy I wasn't baking.  We both need to loose a bit of weight and having all those baked goodies around doesn't help the situation.

Christmas day rolled around & everyone seemed happy with their gifts.  I feel pretty bad for hubby though.  I had never wrapped his gifts & hadn't noticed it.  He didn't say anything about not receiving anything from me & I didn't give it much thought because we'd given each other new tires & a gym membership.  We weren't supposed to give each other anything else, but of course we each did.  Anyway, I didn't notice hubby hadn't gotten his gift until a few days later when I opened my dresser drawer where I'd had things stashed & found his stuff still laying there.  Oops.

But I got the best present ever.  Actually, I got two gifts that have me super excited.  One is a tote bag/purse-like brief case.  It's got room for lots of knitting, all my purse junk and my laptop.  I LOVE it!  No current photos of it.  Sorry.  One of these days.....   The other item came from my Mother in Law & for the life of me, I can't figure out how she came up with it. 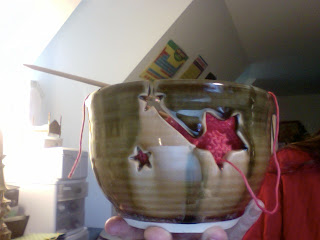 It's a yarn bowl.  Sorry for the bad photo.  I'm not sure where I left my camera & that's taken with Photo Booth pre morning coffee.  Anyway....  I've heard about yarn bowls, seen pictures of them & thought it would be cool to have simply because I like gadgets.  But seriously, a yarn bowl?  A special bowl to hold your yarn?  What a waste of money!  Just use your knitting bag or a Tupperware bowl.  But I have seen the light!  This thing is AWESOME!  Besides the fact that it's hand made & pretty, it works amazingly well.  The yarn doesn't roll out of it, even when you hit a major snag in the yarn.  The yarn even seems to pull easier & more smoothly from the skein.  I don't feel like I have to keep  pulling the yarn out of the skein, it just flows naturally.  The bowl will also hold a stitch counter & a cable needle & when you are ready to take a break, you can plop your knitting into the bowl (it wouldn't hold a sweater, but it does hold a surprising amount of fabric) and have it all contained.  I LOVE this bowl!  Best invention ever.   The only problem I've had with it is that for the first few days, it kept giving me slight panic attacks.  I'd be sitting at the computer desk, watching Buffy DVD's and knitting.  I'd glance over, catch sight of the bowl out of the corner of my eye and go into panic mode because my soup bowl was too close to my knitting.  LOL  I have no idea why I kept thinking it was a bowl of soup.  If you are curious, this particular bowl came from here.

New Year's Eve rolled around and we celebrated in our traditional manner.  Hubby went to work, I took the Christmas decorations down (all but the tree) and the kids slept.  When I went out to take down the Christmas flag, I discovered that it was a gorgeous, gorgeous day.  I hung the snowman flag, said a little prayer that for once it wouldn't bring blizzards, mentally apologized to my husband & his business partner & took a break from cleaning.  Now, I'm sure you are wondering why I'm praying & apologizing over a flag, but Mr. Snowman seems to have super powers.  It's gotten to be sort of erie how our weather suddenly changes & the snow & ice hit as soon as I hang that flag.  Hubby has made me promise over & over again to never again hang it (apparently I like to break promises) and his business partner has offered me money not to hang it & threatened to burn it if I did.  Snow impedes their work flow so they aren't big fans.  Anyway, after hanging Mr. Snowman, I sat out on the porch & basked in the sunshine.  I was wearing a long sleeved t-shirt and actually got hot, almost sweaty!  It was that warm.  I never did check the thermometer, but it had to be close to 70 degrees.  Mr. Snowman is going to have his work cut out for him after all that warm sunshine.

For New Year's dinner, we (hubby) did the traditional grilling, but this year he didn't have to wear a winter coat, hat & gloves while he did it.  And as our tradition goes, we ate well then all went our separate ways within the house.  Twenty minutes to midnight, Hubby announced he couldn't stay awake any longer and within minutes, he was in bed & snoring.  The kids & I gathered to watch Dick Clark & the ball drop, we did our  New Year's hug & kiss thing then all went our separate ways once again.  Personally, I went back to trying to finish my book & gave a box of Oreo's a run for its money.  I was hoping to finish the cookies so that they wouldn't be here in the house today, but the Oreo coma struck before I could polish them all off.  Now I'm struggling with the moral dilemma of telling the kids they can finish them or hiding them for when I'm in serious "I Need Chocolate" panic mode.  Decisions, decisions.
Posted by Jeannie Gray Knits at 9:35 AM