I finished my Hitchhiker scarf and love the way it turned out. 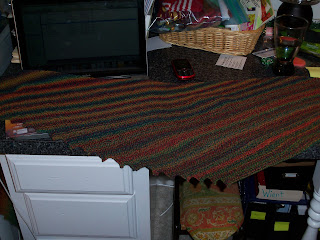 That's it spread across my desk.  I love the way with the self striping yarn worked with the points.  I also like that while the pattern is written so that there are four garter ridges in each point, it’s not all that noticeable if you knit five.  I’m calling it a design element. 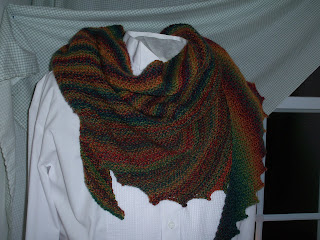 Wow.  These blog photos are showing you fine people way too many of my dirty little secrets.  Yes, that is a sheet being used for a window curtain and yes, it is not only thumb tacked over the window, it also has a thumbtack holding it open.  But you see, I could never decide on what type of curtains to buy.  I could never decide if I wanted curtains, blinds or shutters.  We’ve also never been able to decide on a color scheme so we continue with our very blah apartment house white walls & beige carpet.  And a sheet over the window to block the blinding sun.
But back to knitting....
I loved the Hitchhiker scarf so much I decided to knit another in a Christmassy multi-hued red. 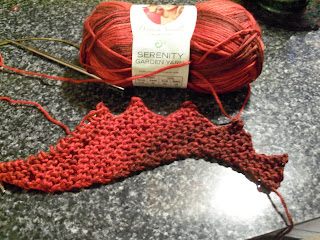 I didn’t get very far when I decided to put that project on hold while I knit a red ribbed scarf that will either be a Christmas gift or end up for sale at Jeannie Gray Knits.  Basically, I decided to work on the ribbed scarf because it takes less attention.  I was watching the season finale of Sons of Anarchy & needed mindless knitting while I fretted over Jax. 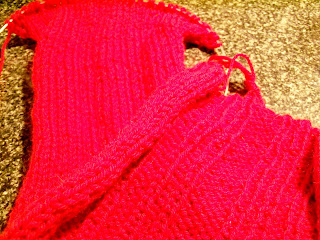 The picture is horrible and the lighting is even worse.  It’s really a nice typical, deep Christmas red, not that blinding pink shade that’s showing up on my monitor.  In a moment of creative weakness, I named it Random Ribbed scarf because the ribbed pattern is placed randomly across the scarf.  I rather like the way it’s turning out.  The front looks like flat knitting, but the reverse side shows the vertical stripes caused by the ribs.
I was also feeling a bit guilty about all the projects I’ve committed to knitting but haven’t yet started on.  I decided to start the donation shawl/scarf for TRO because it’s not actually due until after January 1st.  Seemed like a good idea at the time to start the project with the farthest due date rather than working on the one that’s due next week.  After all, I do tend to work better when under some pressure. 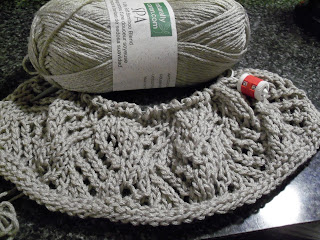 This shawl/scarf will be donated to TRO to auction off to raise money for lung cancer.  TRO stands for Teens Reaching Out which is a group of homeschooled teens who gather to perform local service projects.  One of their on-going projects is raising money for cancer research.  Since my dad and father-in-law both died from lung cancer (the same form, ironically) and I like to knit, I thought it would be a good match.  Luckily, the shawl is not due to them until “well after Christmas” because, although easy, the pattern does not seem to be memorable.  Granted, I’ve only knit one pattern repeat, but no matter.  I have serious doubts that I’ll ever be able to memorize more than that the first & last two stitches are always knit.  I love the pattern though and think it will make a great prom shawl which could also be worn as a bulky scarf in colder weather.  I also love the color.  It’s an odd, non-describable color.  It’s not gray, silver, white, or beige, but sort of a combination of all those colors.  The yarn company calls it Misty Taupe.  I thought it was the perfect color to represent lung cancer since it’s assigned color is pearl or white.  White would have been a good yarn choice, except then you have the issue of white white vs. creamy white...   My thoughts are that this non-silvery/gray/white/beige Misty Taupe would go with both white white and creamy white.  Hopefully.  Not to mention I’d go berserk from boredom of knitting 70 inches of white.
So, that’s what I’ve been up to lately.  How about you?
As I typed this, I received word that there’s been another shooting at Virginia Tech & that the gunman is still at large.  My thoughts & prayers go out to the Hokies, their families & the police involved.
Posted by Jeannie Gray Knits at 6:29 PM 1 comment:

The bazaar was bizarre.  There was no one there.  No one!  I was expecting 25+ vendors, there were 6, including me.  The shoppers were even fewer.  Not counting the bazaar's employees & other vendors, there were four families that stopped by.  Three of them bought something, so my sales percentages were great, but four shoppers over a five hour period ....  rather depressing.  I did make my entrance fee back, in fact, I made two additional dollars!  Of course, that's not taking into consideration the gas it took to drive 224 miles to and from for setting up on Friday and the actual sale on Saturday.

But all whining aside, I got quite a bit of knitting done, I had fun chatting with Traci, and I did learn a few things.  First, I learned how to use my husband's GPS.  He calls it The Bossy Bitch, otherwise known as his wife away from home.  Nice.  But she is rather insistent.  There were several times I considered running the red light at very busy intersections just to get her to shut up about making that left turn.

I also learned how important it is to ask the right questions (in writing) before sending in my vendor application.  Things like, how many people attended the previous year?  How many vendors are already signed up?  How much advertising are you going to do?  If you can't produce the expected number of vendors, will you be refunding my money & canceling the bazaar?  And the one question that's sort of bothering me most, if you charge a vendor extra for an electrical outlet, are you going to make sure the other vendors do not have access?  For some crazy reason, that extra $5 fee is bothering more than anything else.

But at least it's over with.  I can stop worrying about it and stressing over it.  I can now chill out and enjoy the Christmas season.  Just as soon as I get those custom orders taken care of.  They seem to be piling up faster than dust bunnies.  Don't get me wrong - I'm not complaining.  Just saying.

But before I return to frenzied knitting, I think I'll eat some more spinach dip.  I had it for breakfast.  And now I think I'll have it for my afternoon snack.  In case you couldn't tell, spinach dip is like crack to me.  But hey - it's spinach.  It's good for me.  Let's just don't mention what ever is in the creamy part.  But I'm sure that's healthy too.  Sure of it!
Posted by Jeannie Gray Knits at 4:01 PM No comments: