Aack!  50 days to Christmas!  I could have done without seeing that tidbit of information this morning.

This needs to be rather short because today is Homeschool Creative Writing Group day with the kiddos, which means I should be getting in the shower instead of typing this while drinking one more cup of coffee.  But hey - I need the coffee.  I need to be highly caffeinated before I go into that room with a group of very creative teens.  They weren't always so creative, at least a few of them weren't.  A few of them used to sit slumped in their chairs, arms crossed, and glare at me when I'd give them the topic of the day.  Today, a few of them still roll their eyes at the topics, which is okay.  They aren't always cool topics.  But the fun, exciting thing is, even those kids who used to hate being there, now write some seriously cool & creative stories based on the not so cool topics.  I love my writing group kids and frankly, I'm slightly jealous of their abilities.

But this is supposed to be about knitting.

I sort of took a break from knitting for a while yesterday.  The UFO guilt was getting to me so instead of knitting, I decided to try my hand at beaded stitch marker making. 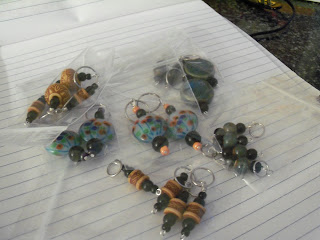 I am LOVING making the stitch markers.  I just hope I can sell a few of them at the up coming holiday bazar because even I don't need 100 beaded stitch markers.  And judging from how many beads I have left, 100 is a low estimate.  And I won't even mention how I'm planning to sneak to the craft store to buy more beads.  Apparently, I've discovered a new obsession.

After dinner, I went back to knitting miniature Christmas stockings. 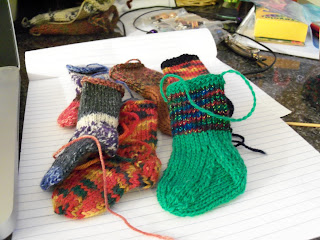 I love knitting these little guys.  They are relatively quick and a great way to use up those tiny bits of left over sock yarn.  Granted, they don't look much like Christmas stockings.  They look more like mini socks, but since they make fantastic Advent calendar stockings, who cares if they look like socks instead of stockings.  Besides, 24 red stockings lined up would be boring.  Not to mention how mind numbing it would be to knit 24 red mini stockings.   Anyway, I like to make them in groups of 24 and hang them from garland or on the Christmas tree.  I tuck candy, coins, or little love notes into them.

Ok, I don't really tuck love notes into the Advent socks.  I'm just not that gushy.  But it's a good idea for someone who is.  I also rarely tuck coins inside.  I'm more of a candy girl.  But coins are nice, they just aren't chocolate.  Well, I guess some coins are.  Hmmm......
Posted by Jeannie Gray Knits at 9:09 AM