I'm counting down to lots of things these days.  Of course there's the Christmas count down, but I don't even want to think about that.  That counter thingy over there on the side says 24 days.  Yikes!  How can that be?  Think I could postpone Christmas by deleteing that counter?

I'm also counting down until December 26th when I'm going back to eating healthy.  My diet has been beyond horrible lately and it shows on my body.  I won't go into how much weight I've gained or how sluggish I feel.  Let's just say I'm looking forward to 12/26.  I know I could start now and probably feel a lot better about the fact that there's only 24 shopping days left, but....  it's just too hard to eat clean during the holidays.  I am, however, trying to make an effort to only eat the good, tasty junk and not to eat junk just for the sake of eating junk.   Judging by my recent binge on stale candy canes, I'm not making a lot of effort however.

Then there's the count down to the AAR Holiday Bazaar this Saturday.  It will be my first time participating in a bazaar as a seller and I'm a little nervous.  My friend Traci is participating too so I know we'll have a good time even if neither of us sells a single thing.  Of course, we'd have more fun if we sold everything, so come on out & shop with us.

I've been a bit obsessed lately with creating things to sell at the bazaar and have done no knitting for myself in ages.  Actually, I haven't knitted for me since I opened the Etsy shop.  I decided that it was time to start and saw the Hitchhiker scarf pattern mentioned on Wendy Knits and instantly fell in love. 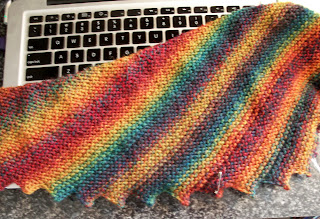 Ok, so it doesn't look like much there, but I LOVE the pattern and the way the yarn is creating those stripes.  I'm using Patons Kroy Socks in the Clover colorway.  It's a very simple pattern which creates a loooooong, thin triangle that curves so it will easily wrap around your neck, scarf-style.  I think I'll probably make a zillion of these scarves before I'm done.  Because you know I need a red one, a green one, a blue one, a purple one, maybe a creamy white one, and of course, they'd also make great gifts for both the men & women in my life.

So, I'm signing off of here and going back to knitting.  And doing laundry, which is another thing I'm counting down.  Can anyone tell me  how one family creates so much laundry?  It's not like I have 18 kids.  We are a normal, four person family, but if you looked at our pile of dirty clothes, you'd think we had 24 kids.  Sheesh.  So, I'll go toss another load in, then I'll start knitting.  Knitting after I turn Buffy the Vampire Slayer on.  Have I mentioned that's my new passion?  How did I not know about this show?  Well, I knew it existed but I always thought it was the dumbest thing on earth.  But that was before I ever watched a single episode.  Now, I'm obsessed and it's all I want for Christmas.  Buffy DVDs.  Well, and yarn.  Buffy and yarn.  What more could a girl want?

Well, maybe a laundry maid.  Buff, yarn and a maid.  That's my Christmas list in a nutshell.
Posted by Jeannie Gray Knits at 12:50 PM