It seems that I have found my chocolate threshold.  Hubby took Number One Son to bowling last night, The Daughter was busy munching on what ever she'd scrounged up in the pantry and in a not so brilliant move, I decided to have Hershey Kisses and Marzipan flavored coffee for dinner.  I don't, as a rule, drink flavored coffee but occasionally I indulge and a non-coffee-drinking friend had been given the bag of coffee and she'd passed it on to me the day before.

I know!  I have a non-coffee drinking friend!  Can you believe it?

Anyway....  I drank flavored coffee, which turned out to be excellent even though its Use By date was May of 2010.  I also ate almost an entire bag of Hershey Kisses.  To my credit, it was a normal size bag, not the giant, economy, Halloween size bag, but still. It was a lot of Hershey Kisses.  I got down to where there were only five or six let and felt like I might die.  I tried to finish them off.  I knew if I didn't, I'd start eating them again the next day or the day after that and end up wanting more.  But I couldn't do it.  I literally couldn't eat another Kiss.

Meanwhile, while Zack bowled, Mike did the BJ's shopping.  My Lord!  He must have bought one of everything in the store.  He brought it all home & stacked it on the dining room table, which apparently has stronger legs than I'd ever have believed possible.  This morning, I put it all away.  And when I was pouring the chocolate chips out of their giant floppy bag & into my Tupperware Chocolate Chip Keeper, I spilled a few.  And rather than eating them, I picked them up and through them away.  And that's how I know I've reached my chocolate threshold.

As for the knitting, I haven't been working on anything exciting lately.  I have several projects that only have a little bit of knitting left, or they need to be sewed up & of course there are a few second sock issues lurking in the basket.  My Good Girl self wants to finish those items before I start something else.  Unfortunately, I'm rarely my Good Girl self and those items continue to sit.  But the guilt prevents me from starting something new.  It's a horrible knitting Catch 22.  So, I knit a few Treasure Bags yesterday. 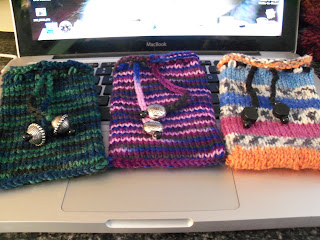 Ok, not a great photo, but cut me some slack.  I'm still suffering the chocolate hangover and I haven't had a full cup of coffee yet.

I really enjoy making those bags though.  They are quick and simple and "needing" beads gives me an excellent excuse to go craft shopping.  I've never done any beading before so the bags have opened up a whole new area of the craft store to me.  There are some seriously cool beads out there!  And that's at the local big name craft stores.  I can only imagine what I'd find at a store that specializes in beads.  I'm purposely avoiding Google.

And chocolate.
Posted by Jeannie Gray Knits at 9:55 AM