I hope everyone has a safe, candy filled Halloween this year.  We will be spending the day bowling (when don't we spend the day bowling??) Then we'll rush to the local gas station to buy candy, then rush home to get dressed for trick or treating.  Why will we be rushing to the gas station to buy candy you ask?  Because, yes, once again, for the second year in a row, I failed to prepare.  In my defense, I thought we had another week.  I mean, how in the heck did it get to be October 31st already??  Argh!   I feel like I'm trapped in a time warp.

But anyway....  here we are, October 31st. and we have no candy, no pumpkins and I spent the entirety of October 30th frantically sewing costumes.  I hate sewing.  And I'm very glad I haven't donated blood lately because I needed every ounce I had yesterday.  I have the feeling I may be down a quart or two.  It's also a very good thing that Sarah's costume is trimmed in red ribbon because her outfit has just a tad bit more red on it than was intended.  And I find that I'm typing with my pinky fingers because all the others are so sore from the numerous accidental finger pricks.

Ok, let's move away from that whine fest.

I recently joined Twitter, much to my kids' dismay, and boy!  I'm a talker!  I never realized how wordy I was until my thoughts/rambles were reduced to 140 characters.  I also have no clue to what I'm doing on Twitter, but I'm having loads of fun annoying my kids by tweeting silly, meaningless things every few minutes.  I also find it rather strange that after only a few days of being on Twitter, I already have more followers than I do Facebook friends.  Weird.  Cool, but weird.  If you'd care to join my madness, follow me @JGKnits.

One more thing I should mention.  And I sort of hesitate to mention it because every time I state, "I'm going to .....," I automatically don't do it at all.  But, maybe this time will be different.  Yeah, and monkeys will fly.  But here goes anyway.  Back in the spring or summer, when my brain was fried from 100+ degree temperatures and humidity levels even higher, I signed up for Nanowrimo.  I don't know what I was thinking.  I have no idea how to write a novel and while I have to admit, I've always wanted to be A Writer, I don't actually have the desire to write.  I just like the idea of sitting at a desk under a window, surrounded by pads of paper and notebooks, a few cool pens, and a bottle of booze.  But back to Nanowrimo.  I'm not doing it.  However, because those Nanowrimo folks sound so excited about their project and they keep sending me fun, excitement filled reminder emails, I'm going to do my own version.  There, I said it.  The kiss of death.  Oh well, maybe this time will be different.  My plan is, rather than write a novel in 30 days, I'm going to blog.  Every day.

And maybe those monkeys will fly!

So, prepare yourself for some bad, boring writing.  I have enough trouble blogging once a week.  I also have no plans for anything specific to talk about.  I'll just do my normal, routine blathering on.  Although some days, ok, most days, I expect the blathering to be short. Probably not sweet, but short.

So, have I put some Halloween fright into you yet? 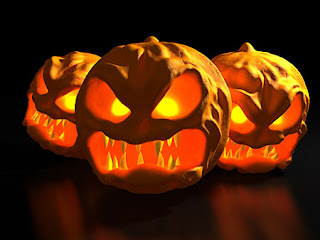 Happy Halloween!
Posted by Jeannie Gray Knits at 8:34 AM