I must have been channeling Martha Stewart last night.  I finished Kate's shawl yesterday afternoon and since the dear daughter was unavailable, I forced my son to model it.  He was NOT happy about it and as it turns out, I wasn't happy either.  Seems I failed to add in a few increases on one side of the border which is causing it to curl weirdly.  In frustration, I tossed the shawl aside and cast on for a simple cowl.

I used the long tail cast on method and kept casting on until I ran out of tail.  Then I counted my stitches.  Since they were divisible by 4, I decided to do a 2x2 rib.  On the fifth row of ribbing, I got bored and switched to stockinette. 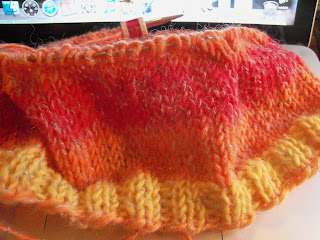 Imagine my surprise this morning when I opened my email to find Lion Brand offering a free pattern using Martha Stewart's new yarn.  The pattern is for a stockinette cowl with 5 rows of 2x2 ribbing.   Freaky.

There are a few differences though.  My gauge is much looser and I'm using yarn Bee's Rainbow Wool in the Sunset color way.  I've never used this yarn before, but so far, so good.  I'm not normally a big fan of orange, but lately....  I think it was the early onset of Fall Fever.  It seems that for the last month or two, I've instantly fallen head over heels in love with every orange thing I've seen.  But no matter.  I think this cowl will be very cheerful on those long, gray winter days and it will remind me that Spring will come.  Eventually.
Posted by Jeannie Gray Knits at 10:24 AM