So, I'm in full knitting panic mode.  I've got way too many projects OTN and their unfinishedness is making me edgy.  Actually, more like full panic attacky.   I opened my Etsy shop back in August and I still haven't quite figured out  how to accomplish shop knitting while I knit for myself.  And now that the holiday shopping season is upon us, the kind folks at Etsy keep sending me  reminders to knit, knit, knit so that I have something in the shop to sell.  And of course I have these grand ideas about how I can whip up three or four shawls in an evening and if I drink an extra pot of coffee after dinner, I could probably knit a baby blanket or two as well.  Yeah.  Sure.  No problem.

So on top of having about 50 Etsy projects going on, I also have about 50 personal projects going on.  Well, okay, three personal projects OTN.  But way more than 50 still in hanks awaiting the needles and that's not even counting the Christmas gifts I hope to accomplish.   And then there's the Kate project.  I've promised myself I'm going to start the Kate project on Oct. 1st.   Meanwhile, I'm frantically knitting away at some of my OTNs trying finish as many items as I can before that 10/1 deadline.  Because once I start on Kate's shawl, I'm not going to work on anything else.  I'm afraid if I set Kate aside, even for only a moment, it will stay on the sidelines until the day before I've promised to have it in the mail.

So what exactly do I have on my needles and just how much knitting do I have to get done over the next five days?  Well, there's the baby blanket that I've stashed somewhere and can't seem to remember where, then there's the green Pi shawl from Hell 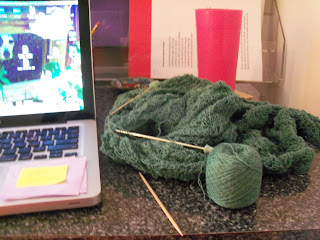 This thing has been in the unfinished pile so long I don't even remember what the pattern was and as you may or may not be able to see, the needle has come out of it.

Then there's the Lorna's Lace socks, which had also lost a couple of needles. 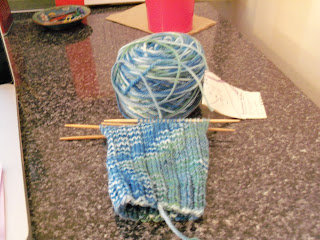 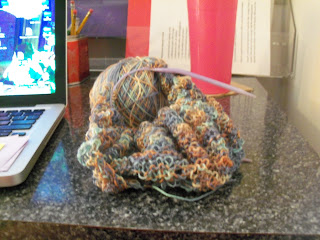 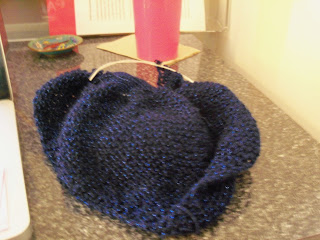 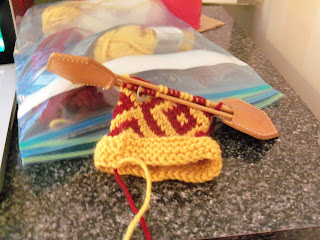 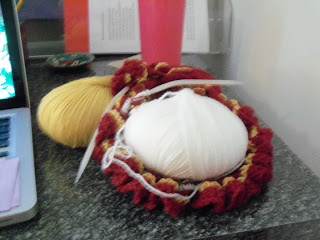 Ribbon Candy, of which I need at least 15, 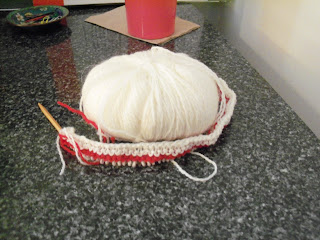 A linen stitch scarf, which I'm super excited about although it knits up even slower than I run. 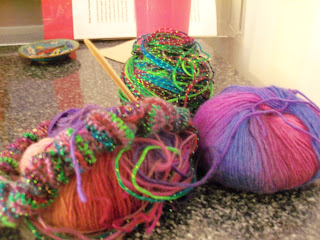 Did you happen to notice a theme with those photos?  Besides the theme of bad lighting & blurry photo taking?  Ah  yeah.  Anything with an "s" on the end, means I have a whole other one to knit.  As in, a second mitten,  a second sock & 14 more ribbon candies.  And did you notice the fact that the shawls were only measuring 5 or 6 inches while the scarves had less than an inch done so far?  Uh, yeah.  There's going to be a few late nights over the next five days.

And then there's the Kate project: 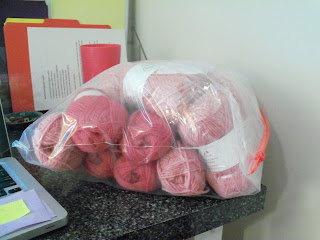 Although I'm complaining about knitting this, I'm actually looking forward to it.  The light pink yarn is the main color and it's to die for.  It's a simple pattern that should knit up rather quickly.  It's just that I'm going to have to do a bit of math before I start knitting, thus my aversion.  Once it's cast on though, I know it will be a happy knit.  I would like to get at least one of the above finished first though.  Wish me long, sleepless nights.
Posted by Jeannie Gray Knits at 3:50 PM