Although I'd promised myself I would finish the mitered mittens before I started anything else, I suddenly got the urge to cable yesterday.  Of course, the urge struck five minutes before I was scheduled to drive Zack to the bowling alley for his Wednesday night bowling league.  I grabbed yarn & needles that I hoped would be appropriate for cabling with that particular yarn & dashed out the door.

At the bowling alley, I knit.  And knit and knit and knit.  And listened to Around the World in 80 Days on my Kindle, which in my opinion, is probably the most boring book ever written.  I would never have gotten past the first paragraph if I was actually taking the time to read it.  Listening to it while I knit is bad enough.  But, it's on my 101 list so I press on.

I'm also digressing.  Back to knitting...

Wednesday night bowling seems to last for ever!  Actually, it's about 3.5 hours.  Fantastic knitting/reading time actually.  I only complain because the seats are a bit uncomfy.  You'd think with all of my natural butt padding I'd be okay, but....  Anyway....  After a couple of hours of knitting my cable (it's a scarf & only has the one cable running down the center) I realized something.  Something horrible.  There was a major problem with my cable.  It's a three sectioned cable and the first ten or so twists of it had the center section running straight up the center with the other two sections twisting behind it.  The eleventh through thirteenth cables were braiding themselves with all three sections twisting around each other.  What the heck!?!  I swear I wasn't doing anything different.  Ok, so maybe I may have knit two rows less in a couple of those first sets, but other than that...  I KNOW I wasn't doing the actual cable any differently.  Maybe the fact that a few of the sections were shorter was causing the center cable section to act/appear differently.  And well, if I was going to be honest with myself, and if I looked too closely, the error was sort of noticeable.

Two hours of knitting and almost 24 inches of cable, down the drain.

I got home and started over but I didn't get far before sleep overtook me.  I picked it back up this morning and knit a bit while waiting for my email to load.  Has anyone else noticed how freaking slow G-mail has been lately??   Here's what I've got so far: 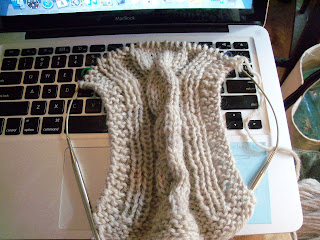 That center section is going right up the middle again.   Please, oh please tell me I didn't frog the original for nothing.
Posted by Jeannie Gray Knits at 9:15 AM